There is More Good Work To Do

In 2009, I learned of my connection to an infamous act of violence against Indigenous people. My family name was on the four cannon that helped to kill hundreds of Lakota men, women and children in the 1890 Wounded Knee Massacre. This sudden knowledge shocked me into searching for truth and healing, and  a commitment to share my time, skills and effort with Wabanaki REACH.

I was invited to tell this story in 2017, under the title “I Have Good Work To Do”: Part 1 Wounded Knee, and Part 2 The TRC and REACH. I described my awakening to intergenerational trauma from the perpetrator's side,  and the beginning of my learning how to heal.

In December 2018, this writing sparked a strong healing connection. I learned of  Brad Upton, whose ancestor

had given the order the morning of December 29, 1890, to fire the guns my relative invented.  We connected around our shared trauma with these horrors, and would end up becoming the best of friends. I connected with some Lakota elders whose ancestors had been victims or survivors of the massacre, including Basil Brave Heart, and HAWK1890 survivor descendants Manny and Renee Iron Hawk and Marlis Afraid of Hawk. Following their guidance, I was able to step forward in a good way.

I drew on my learning with Wabanaki REACH, in how to find a good path of respectful truth-seeking that supports healing and change, to support Indigenous people without talking over them, and to reject the temptation to act like a white savior. Most importantly, I harbor no expectations of forgiveness or reconciliation to relieve white guilt. It is not my place to set a timetable for healing, or to assert that I've met its preconditions. By choosing to acknowledge my ancestor's roles in this historic atrocity, I simply make a lifetime commitment to be present with that awareness and to act with integrity when invited or asked.

Brad and I were both very concerned that we not make ourselves the center of attention. White men often end up becoming the story, to the exclusion of the voices of the people directly affected by colonial violence. We're just here to say, “this was wrong then, it's still wrong today, and we are here as descendants of those who did wrong, to testify to that.”

It is a paradox of settler colonial dominance, that often it takes a white man's action to draw wider attention to the cause of justice. Such an event was Brad's visit of apology to the Cheyenne River Sioux community, where a great number of descendants from the massacre live today. The story was picked up by national and international news services,  but the most meaningful and respectful story was written by a member of the community – Alaina Beautiful Bald Eagle gave his visit the context, respect and recognition of Indigenous people, that non-Indigenous reporters most often miss. 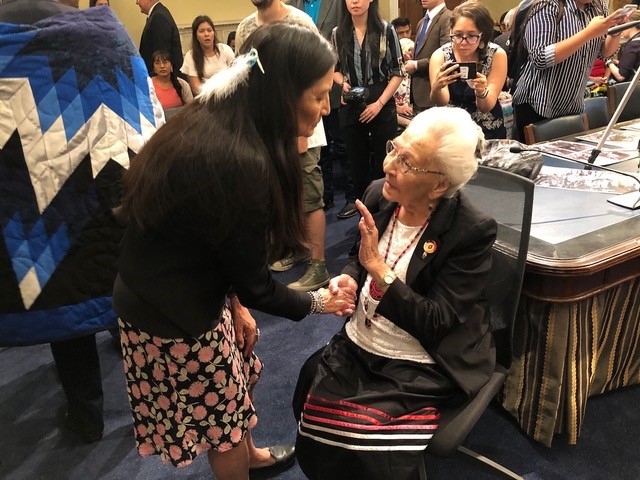 In June of 2019, we had a new chance to act with integrity and in good relationship. Representative Deb Haaland (D-NM), Hopi from Laguna Pueblo, who is now Secretary of the Interior,  introduced a bill in Congress, called the Remove the Stain Act, to rescind the twenty Congressional Medals of Honor awarded to the soldiers who carried out the Wounded Knee Massacre.  There is a whole story about why those medals were awarded, and why they're still in effect, despite the widespread recognition of the truth of that horrible act. Lakota people and their supporters have been calling for the rescindment for almost a century. Now, finally, there was a bill in Congress to make it happen. Brad and I added our voices to support it.

The Remove the Stain Act started out in the Armed Services Committees of both the House and the Senate, but 2020 saw no action on it. It was revived in 2021, as H.R. 2226 and S. 1073. A Lakota-led organization, Four Directions, led by Oliver Semans increased its advocacy with a more favorable Congress. Last February, the South Dakota State Senate, led by Sen. Troy Heinert, unanimously passed a resolution supporting the Act in Congress. The Act itself came very close to passage last fall – it passed the House on a voice vote as an amendment to the National Defense Authorization Act, but was removed by the Senate.

Please read Mr. Seman's eloquent letter to Senate leadership from that time. Although people unfamiliar with the events of December 29, 1890 may hesitate to rescind medals awarded to the soldiers, he puts that resistance firmly to rest. It is worth noting in this context that Indigenous people from all tribes and nations in the U.S. have the highest military enlistment rate of any demographic group. Their service with honor takes a back seat to no one. My own research into the massacre from several reliable sources supports the view expressed in Mr. Seman's letter.  Both Brad and I are honored to be mentioned in his letter – appropriately, below those people who have led the effort for much longer.

The bills remain in their respective Armed Services committees. So, they have a good chance to pass the Congress and become law this year. If you want to advocate for them, now's the time.

It is not for me, a descendant of English settlers, to envision all the ways that good may come when these medals are officially rescinded. I do know, and have seen from the achievements of the Maine Wabanaki-State Child Welfare Truth and Reconciliation Commission and Wabanaki REACH, that public acknowledgement of the truth can release great energy for healing and change. May that acknowledgement also finally arrive, for the descendants of the Wounded Knee Massacre.