Some of Maine’s most beautiful islands, summits, and brooks are marred by racist names that are offensive to Black and Indigenous people and perpetuate centuries-old historical harms. Similarly, many of the state’s roads and even some of its towns and counties are named after enslavers and slave traders. Think Westbrook, Waldoboro, or a handful of sites in Southern Maine bearing the name Pepperrell.

How did these racist and offensive place names come to exist? What is their impact on Black and Indigenous people today? What other derogatory racial stereotypes continue to be evoked here, whether in the form of mascots, statues, or signage? How can we, through the process of renaming sites and revising the narratives inscribed on our natural and built environment, help to create more inclusive and equitable communities? 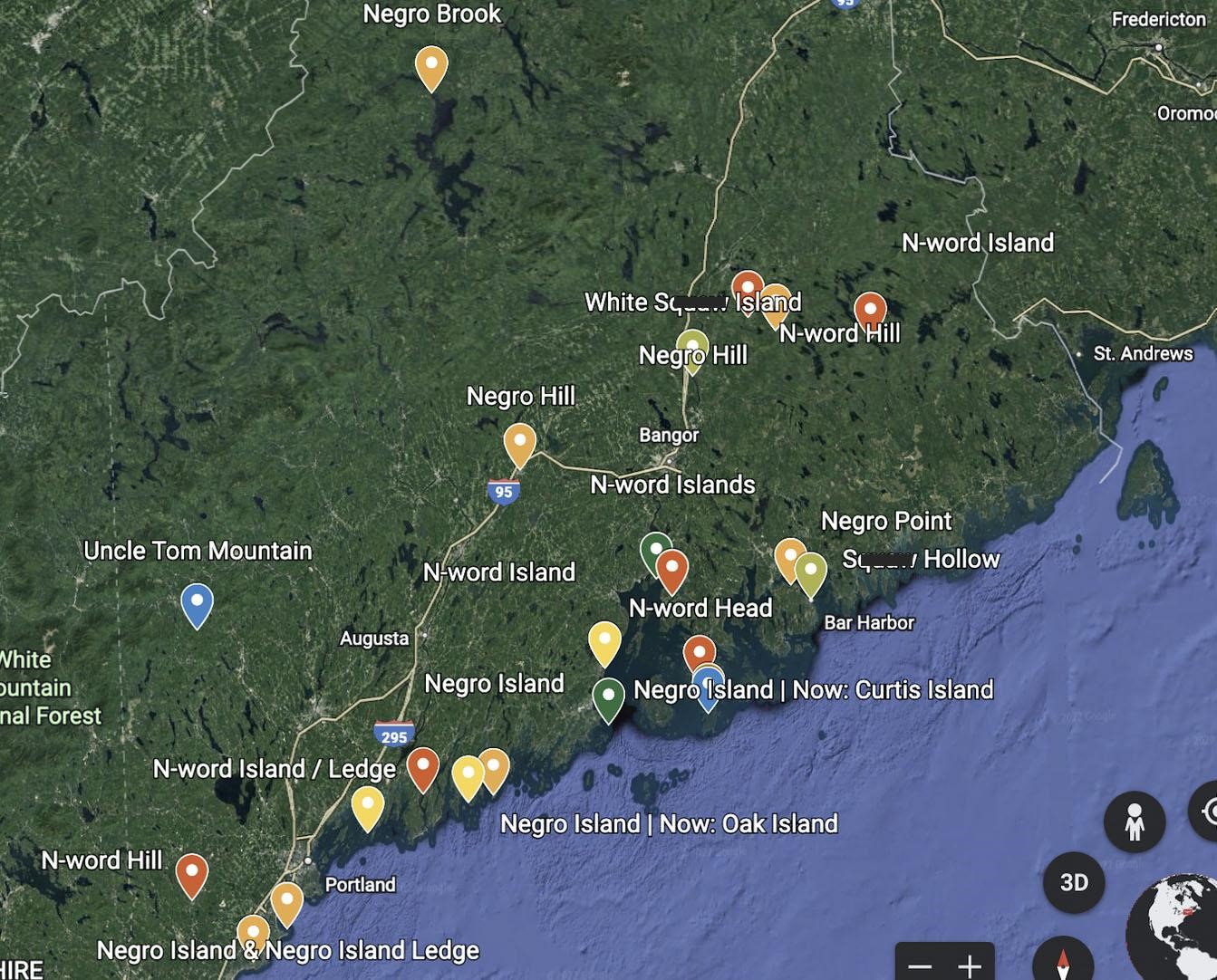 Racist representations constitute a human rights violation. But these names and images are just a symptom of a far deeper problem. At the Permanent Commission on the Status of Racial, Indigenous, and Tribal Populations, we believe that communities thrive when truths of racialized harm and privilege are surfaced, acknowledged, and redressed. This effort requires the wide-scale participation of folks from every sector of society. And it requires our sustained commitment to change.

The Place Justice initiative will engage Maine communities in a collaborative process of identifying and reckoning with offensive memorialization practices–one that centers the experiences of impacted community members and actively creates opportunities for their leadership and guidance while benefitting us all.

Removing and replacing offensive names is hardly a matter of semantics. It’s about making Maine a place that is safe and welcoming, where all people feel cared for and protected based on their inherent dignity and worth.

The Permanent Commission on the Status of Racial, Indigenous, and Tribal Populations

Led by Co-Chairs Representative Rachel Talbot Ross and Penobscot Nation Ambassador Maulian Dana, the Permanent Commission on the Status of Racial, Indigenous, and Tribal Populations was established by the Legislature and signed into law in 2019.

Occupying a unique position vis-à-vis state government, the Permanent Commission represents a broad cross section of the populations most impacted by racial harm and colonization and others historically excluded from policy-making processes in Maine. Its primary role is to identify and eliminate the systemic injustices embedded in the state’s infrastructure, policies, and practices in view of securing improved status and outcomes for historically disadvantaged populations. As such, truth seeking is fundamental to its mission.

A Commitment to Collective Truth Seeking

Truth seeking is a means of bringing to light facts about human rights violations that have been hidden, disputed, or denied. By empowering and protecting individual victims and impacted communities, truth seeking amplifies the voices of those who have been silenced when contesting dominant narratives and seeking justice. In acknowledging past or ongoing harms, truth-seeking processes seek to prompt social and political change and to build support for reparative actions. Recommendations and policy emanating from what is learned through truth-seeking initiatives can contribute to needed structural changes that promote harm reduction, equity, inclusion, and healing.

The Permanent Commission is committed to leading a broad, ongoing inquiry into the harms of racism, colonization, and white supremacy that have occurred on this land. Place Justice is just one of the Commission’s Collective Truth Seeking initiatives that will allow Maine people to share their experiences of racial harm and privilege with the aim of actively reexamining family and community histories through a restorative lens. Thanks to its unique status, the Commission can empower impacted communities to become effective stakeholders in developing new legislation and advising the three branches of Maine’s government in taking reparative actions.

Efforts are currently under way to eradicate offensive place names from sites around our country. In May 2021, the Texas legislature passed a bipartisan resolution urging federal authorities to approve the removal of the racially offensive term “Negro” from 16 sites in the state; in June, the U.S. Board on Geographic Names approved those name-change requests in one sweeping vote.

Last November, Secretary of the Interior Deb Haaland formally established a process to review and replace derogatory names attached to the nation’s geographic features. This recently resulted in the blanket removal of the “S-word”—a racist and misogynistic slur for an Indigenous woman—from nearly 650 waterways, mountains, and other features across the country.

Maine was ahead of the curve in addressing the issue of offensive place names. In 1977, the state’s first African American state legislator, Representative Gerald E. Talbot, sponsored an “An Act to Prohibit the Use of Offensive Names for Geographic Features and Other Places Within the State of Maine.” When Representative Talbot’s LD 1661 bill was signed into law, the event made national headlines.

With the passage in 2000 of LD 2418, sponsored by Passamaquoddy Tribal Representative Donald Soctomah, the definition of “offensive name” in statute was clarified to include both the “N-word” and the “S-word.” Nearly a decade later, it was necessary to further clarify the original law by putting forward LD 797, “An Act To Fully Implement the Legislative Intent in Prohibiting Offensive Place Names,” as a means of prohibiting the use of any derivation of the “S-word” in place names.

Forty-three years after LD 1661 was signed into law, Representative Rachel Talbot Ross learned with great consternation that her father’s landmark bill had not been effectively enforced. It came to her attention in the summer of 2020 that five Maine islands and several other sites in the state continued to bear offensive names. When this revelation was made public, officials hastened to change the names of three of the islands in question and instructed two other localities to follow suit. However, offensive terms remain inscribed to this day on Maine’s landscapes and maps.

The Permanent Commission’s Place Justice initiative takes its mandate from LD 1934, “Resolve, Changing the Identifying and Reporting Responsibilities and Extending the Reporting Deadline for the Identification of Places in the State with Offensive Names,” which was sponsored by Representative Rachel Talbot Ross and passed on April 12, 2022 as an extension bill to LD 1591.

Past experience has shown that legislating name changes does not alone resolve the underlying issue—namely, the racism that took root centuries ago and has yet to be effectively dismantled. The Place Justice initiative expands the scope of inquiry beyond what is mandated by LD 1934 by engaging communities in collectively examining the many ways in which racialized and Indigenous populations are represented in or absent from the narrative inscribed on the natural and built environment in the land now known as Maine.

Who gets memorialized through naming practices and historical markers is a strong indicator of a society's values and its dominant sense of collective identity. By considering the names of geographic features, street names, monuments, historical plaques, exhibitions, cemeteries, and other forms of remembrance at the local level, this investigation will reveal some of the ways in which ideas about our collective identity are crafted, circulated, and contested.

Under the guidance of the Place Justice Advisory, a research team will actively identify racist and offensive place names in Maine; together, they will engage local communities in the removal and replacement of these names. They will additionally highlight for community dialogue places named for individuals having committed atrocities against Black and Indigenous people or having benefited from slavery. The Advisory will organize listening sessions with impacted groups, offer an online education series, and oversee the development of a Community Name Change Handbook.

For more information about Place Justice and to learn how you can get involved in this statewide initiative that offers opportunities for growth, reckoning, healing, and transformation, contact Meadow Dibble at [email protected]

Meadow Dibble is the Permanent Commission’s Acting Director of Community-Engaged Research and is Executive Director of Atlantic Black Box.