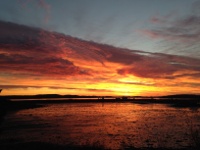 The Wabanaki, or “People of the Dawn,” are the first people of the area known today as Northeastern New England and Maritime Canada. Historians claim that the Wabanaki have lived on this land for more than 12,000 years; oral history asserts they have been here since the beginning. They have always defined their richness by the health and balance of their people, their relationship with the land, and their ability to ensure the health and well-being of their people in practical ways.

Since first being targeted for destruction by Europeans during the 15th century, Wabanaki people have suffered a 96% population depletion due to disease, land dispossession and forced removal, decimation of traditions through Christian conversion, warfare between Europeans, and scalp bounties. Within the remaining four tribes, there are nearly 8,000 tribal members alive today.

Beginning in the late 1800s and continuing until the 1950s the strategies to eliminate indigenous people included forced assimilation and the taking of Wabanaki children away from their communities to boarding schools in the US and in Canada. They were stripped of their cultural identities, punished for speaking their language and abused physically, emotionally, mentally, and sexually. While many died in these schools, there are thousands of boarding school survivors living with the lasting impact of this history and thousands more who the descendants are of these survivors.

Even more Wabanaki people were separated from their families and communities through adoption, foster care and placement in orphanages. A 1977 Senate report revealed that Maine had the 2nd highest rate of Indian foster care placement among states. Even after Congress passed the 1978 Indian Child Welfare Act (ICWA) which gave Native children and families more protection by recognizing the inherent rights of the tribe in child welfare cases, Maine continued to have one of the highest rates of removal of Indian children.

Into the 1990s, Indian children in Maine were being placed with and adopted by non-Native families without notification to the tribe as required by the law.

Chief Brenda Commander, Houlton Band of Maliseet Indians reported that in 1999, “16% of all Maliseet children were in State custody. This disproportionate taking of our children threatened the survival of our Tribe.”
Maine-Wabanaki REACH (Reconciliation, Engagement, Advocacy, Change and Healing) began as a cross-cultural collaborative of state and tribal child welfare workers who knew from their work together that children, families, communities, and systems need truth, healing and change.

In 1999, after the State child welfare department was found to be out of compliance with ICWA, they asked the tribes to join them in working toward best child welfare practices with Wabanaki children and families. The immediate result was a training for State caseworkers that shared history and the voices of those who were in State care, trusting that understanding the spirit of the law would help caseworkers follow the letter of the law. After their work together increased training, improved policies and processes and deeper relationships, the group realized that deeper change was needed through understanding the past and how that impacts the present day realities for the tribes and the state. They initiated the Maine Wabanaki-State Child Welfare Truth and Reconciliation Commission, the first within U.S. territory focused on Indian child welfare and collaboratively developed between tribal nations and a state government.

REACH provided consultation to the Commission and helped prepare and support people in Wabanaki and Maine Communities throughout the process. In June 2015, the Commission released its report of findings and recommendations, REACH works to ensure their implementation.

Intergenerational trauma, also known as historical trauma, is defined as increasing emotional and psychological wounding across generations that stems from massive group trauma. The massive group trauma experienced by Native people has occurred across generations beginning with the taking of their land, lives (through murder, bounties, war and disease), children (through residential schools, adoption and foster care), language, spiritual practices and impoverishment. The taking of Native people’s traditional ways of dealing with grief compounds the impact of trauma by undermining their capacities to care for one another and to promote healing from these harms.

According to Abadian, “The collective traumas of colonization affected nearly 100% of indigenous peoples. Healthy childrearing practices were disrupted or warped by involuntary boarding schools. Native spiritual practices and traditions were banished and missionaries often replaced them with foreign religious forms that tore apart the community’s social cohesion. It is like an epidemic hitting a society when its doctors and healers have been exterminated. No one escapes the ravage.” (Lambert, 2008).

Wabanaki people – Passamaquoddy, Penobscot, Maliseet and Micmac – have experienced such trauma and have had their traditional ways taken from them. Unresolved, this trauma shows itself in many ways in Native families and communities. Emotional and mental health challenges, health problems and high mortality rates, substance abuse, family violence and other socio-economic distress are common in those who experience intergenerational trauma.