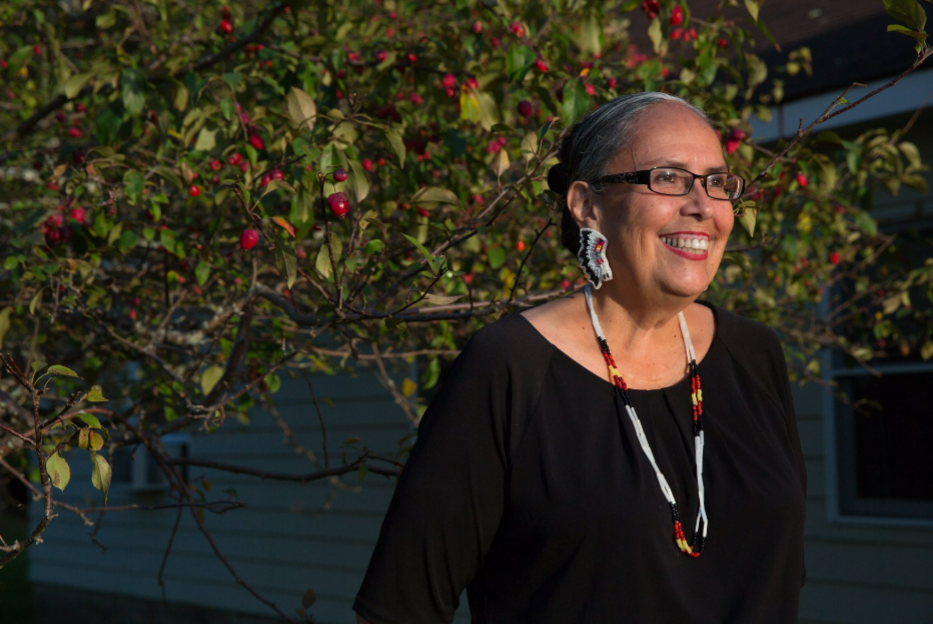 In recognition of Sandy White Hawk’s tireless work on behalf of Indigenous children throughout her life and as current President of the National Native American Boarding School Healing Coalition and in observance of her new book: A Child of the Indian Race: A Story of Return (release date December 8), we offer the essay ‘In Honor and Celebration of Sandy White Hawk’ originally published April 2, 2017.

We are proud to announce that Sandy White Hawk has been named the 2017 Champion for Native Children by the National Indian Child Welfare Association (NICWA).

NICWA describes Sandy as “an incredible leader in Indian Country who has made outstanding contributions to the well-being of children and families. Among her many accomplishments, she is the founder and director of First Nations Repatriation Institute and has become a spokesperson on the issues of adoption and the foster care system and how it has impacted First Nations people.”

In Maine, we know Sandy as a Commissioner for the Maine Wabanaki-State Child Welfare Truth and Reconciliation Commission. We have stood with her in prayer and sat with her in circles. We know her capacity to listen deeply, to share from her heart, to see the goodness in all people, accepting them where they are. We know her joyful laughter and her courage to stand in the midst of pain and hurt. We know her warmth and her advocacy.

This recognition is NICWA's highest honor and we join them in celebrating Sandy in this well-deserved award.

Sandy was born on the Rosebud Sioux Reservation in South Dakota. At the age of 18 months, she was adopted out to a white missionary family who believed that they would be helping a child to have a better life. Sandy tells us that, “this idea did not come from grace (a basic Christian concept), but rather a cruel assumption that Indian families did not have a religion and a spiritual belief system or a family system. All they saw was the poverty and alcoholism, compared it to their privileged life and came to the conclusion that they and their way of life was superior.”

Sandy followed a long life journey that eventually brought her back to her Lakota community at age 35. There she found her family, who not only remembered her, but had been waiting for her return. She found her people and her culture, participating in pow wows, ceremonies and social gatherings. She found herself, her spiritual center and healing from what she called the “cruelest form of abuse: the complete rejection of my natural spirit.”

Reconnecting made her realize she was not alone and in this, Sandy also discovered her purpose. She founded and is the Director of First Nations Repatriation Institute (FNRI), the first organization of its kind whose goal it is to create a resource for First Nations people impacted by foster care or adoption to enable them to return home, reconnect, and reclaim their identity.  The Institute also serves as a resource to enhance the knowledge and skills of practitioners who serve First Nations people.

Sandy organizes Truth Healing Reconciliation Community Forums that bring together adoptees/fostered individuals and their families and professionals with the goal to identify post adoption issues and to identify strategies that will prevent removal of First Nations children.  She has also initiated an ongoing support group for adoptees and birth relatives in the Twin Cities Area.

Sandy has become a spokesperson on the issues of the adoption and the foster care system and how it has impacted First Nations People. She has traveled worldwide sharing her inspirational story of healing. She has served as an Honorary Witness of the Truth and Reconciliation Commission on Residential Schools in Canada.

She is a contributing author to several publications - Outsiders Within: Writing on transracial adoption, Parenting as Adoptees, and The Kinship Parenting Toolbox.

Sandy was awarded the Women in Wellbriety Dana Tiger Award for Creating Change in Nations, named one of the Innovators in Color Lines Magazine, named one of the 50 Visionaries Who are Changing Your World, Utne Reader, 2008, named Outstanding Native Women Award from the University of Minnesota 2003 and was named one of the “50 Most Influential and Cool People” of Madison, WI, in Madison Magazine, November 2002.

While we are very proud of all Sandy has done, we are most proud to call her our friend, our relative, it is truly a blessing.

Wherever you are on April 4th, pause and know that Sandy is receiving this honor – on the very same day when we will pause in prayer all Native children. It is fitting that both of these sacred events will happen on the same day.