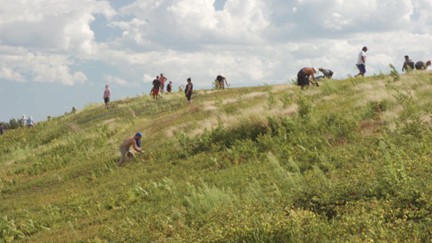 Join us for an online screening of the documentary Voices From the Barrens followed by and a panel discussion with REACH Wabanaki Wellness Coordinator, Brian Altvater, filmmaker Nancy Ghertner. The film will be available to view a week leading evening of the panel discussion on Thursday, October 20, 2022, at 6:30 PM.

Voices from the Barrens, Native People, Blueberries and Sovereignty, documents the wild blueberry harvest of the Wabanaki Indigenous People from the USA and Canada as the tribes are challenged to balance blueberry hand raking traditions with the economics of the world market. The documentary was filmed from 2014 to 2019 and was released in 2020. It has been part of nine film festivals,  part of the Maine Public’s Film Series, and at many colleges and universities across Maine and New England.

Pre-Registration to view the film and to participate in the online panel discussion is required, please sign up below. Registrants will receive a follow up email with instructions and a link to the film and event.

This event is free and open to the public. Contributions supporting our ongoing work are greatly appreciated.

Nancy Ghertner, the film’s director, lives along Lake Ontario in New York. She was introduced to the Passamaquoddy at Sipayik while she was a student at Colby College where she was involved in a research project related to the tribal communities of Maine. She subsequently followed a path into the visual arts and has created numerous experimental and documentary films. Her 2011 feature documentary, “After I Pick the Fruit” was screened at various film festivals and received a Documentary Achievement awards. “Voices from the Barrens,” was started from Nancy’s research into agriculture labor across the international border.