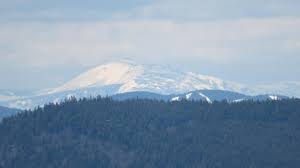 During the last few cold and windy days of December, I decided to hike to the top of Black Mountain. I was very excited, especially since it had been a while since I had climbed a mountain. The memory of this day is so vivid; it was extremely cold and windy, a beautiful sun-shiny day. I was at a point in my life that was real pivotal due to my feeling confused, frustrated and extremely anxious. It was like coming to a crossroad of life’s difficulties, not knowing which way to turn. I was sensing that I had to do something that would give me more direction in life. Usually after a long strenuous walk, my head was clearer, and I felt like a whole person again.

The wind-chill factor on that particular day, without a doubt, was well below zero. I packed a lunch, thermos, plenty of warm clothes and a scarf. I started my hike up the mountain at a pretty good pace, just enough to get my heart pumping my blood to maintain a nice warm body temperature.

I roughly reached half-way up when I saw what looked like stairs, or steps of rock, going up the side of the mountain. The top step was probably eight feet high and six feet wide and a good eighty feet in length. Some of the other bigger steps were the same, but they were at least fifteen feet high. Looking up at this formation reminded me of Mother Nature’s way of creating steps to the top of the mountain.

The most fascinating part about these stairs was the huge icicles hanging from each of them. The icicles varied in size from only a few inches thick to several feet thick. The length of the icicles was every bit as unique. They were four or five feet and some stretched to the height of the biggest step that was fifteen feet long. I took my knife out of the sheath and started to knock the icicles down by stabbing them.

As the icicles fell, they made a loud crashing sound and I felt like a little boy playing all alone on Black Mountain on a cold winter day. When some of the larger pieces of ice broke up, they tumbled down each step until they reached the bottom of the rock formation. I played with the ice for several minutes then decided to continue my ascent up Black Mountain.

I don’t know what drew me toward this particular mountain, but I always knew that there was something special about it. There were times when I felt something tugging, pulling inside me, drawing me to this sacred place. Even before I ever set foot on Black Mountain, I felt a part of me had been there before. Physically, I may not have been there, but I’m sure my spirit had been there in a time that has long since passed

Another unique feature that was different about this mountain was the four high peaks it had with the highest one set on the northern side of the mountain. This happened to be the direction I was heading in and where I found a small, deep, beautiful pond a couple hundred feet below the summit. When I first found out that there was a pond on top of Black Mountain, I wanted to explore all the more. As I walked towards the summit, I noticed an abundance of ice on the ground but there were only small patches of snow, which was unusual for the end of December, especially on top of a mountain.

I came to another one of the four peaks, overlooking Wizard Pond, which must be a glacier pond. The pond was nestled between a very heavily wooded, steep embankment on the northern side and rocky cliffs which rose eighty feet above the pond on the southern side. The western side of the pond was sloped down and looked like the source where run-off water from rain melted ice and snow flowed into the pond. The eastern side of the pond was the side where the outlet was. As the water flowed out of the eastern end of Wizard Pond, it flowed for less than one mile before draining into a lake. I thought to myself, there’s a good reason why this place is appropriately called Wizard Pond.

I then walked across the pond that had several inches of ice on it and proceeded to climb in the direction of the northern summit. Rather than head straight up, I made a half circle heading up to the top. A few feet away from the summit, I decided to stop and say a prayer to my higher power, the Great Spirit. I’ve only prayed on one other mountain summit; the Great Smokey Mountains in North Carolina. There I prayed in the four directions first facing the East, then turning clockwise and finishing in the North. This was an emotional time for me because life’s burdens were beginning to weigh heavily upon me and I was feeling the brunt of it. Oddly enough, in the midst of all my pain, my reward from the creator was the ability to grow spiritually.

My decision to climb to the summit of Black Mountain was to pray to the four directions and ask the Great Spirit for guidance, strength, and direction. My life had become confusing, frustrating, full of pain and I did not know where to turn or go. I decided that I would first pray toward the West then move clockwise, eventually ending in the South. When I was done, this would leave me praying toward the South, the opposite direction of when I finished praying on top of the Smokey Mountains.

The wind was howling, blowing quite hard on top of the northern peak of the mountain. I wore a scarf over my face to protect it from the bitter and biting cold. I couldn’t help but notice the beauty of Mother Nature through Old Man Winter. The cold wind felt refreshing and the sun shining so brightly, mixed with the bitter cold, made visibility crystal clear. Not only could I see a number of other mountains in the distance, I could also see the ocean to the south, although it was so many miles away.

As I stood on top of the highest point of Black Mountain in the gripping cold, I started praying. They were short prayers, but my entire heart and soul were wrapped in them. I started by saying a short prayer in the direction of the West, the moved clockwise to the North, then I said a prayer toward the East. As I turned to face the South, I looked up as the most beautiful eagle flew overhead. I never had a chance to start my special prayer towards the South because the tears came to my eyes immediately.

I slouched over and knelt down, sobbing uncontrollably, thanking the Great Spirit because this was my vision, my sign that my endless prayers had been answered.

I knew then that I was on the right path, as painful as it was. I was no longer confused, my mind was once again clear, as I gave thanks and then jumped off the rock which was probably three or four feet high. I then looked up to the direction in which I was facing when I had seen the eagle only a few seconds earlier, but he was nowhere in sight. I told myself that it was impossible for him to fly away that fast.

I gazed south toward the ocean, and the sun was shining brilliantly off to the right. I could see the reflection of the sun glittering on the water like thousands and thousands of radiant diamonds floating on top of a sea of liquid gold. For no apparent reason I looked up in the sky and there was the eagle now hundreds of feet higher than before, flying toward the direction of the sun. My eyes, no longer sparkling from the tears that flowed freely only a few seconds earlier, were now locked onto the eagle’s flight. I followed his movements as he soared toward the sun on the winds of winter. I could barely see him, and when I did lose sight of him, it was at the same time that the sun was in my direct view. It was almost as if the eagle flew and disappeared into the sun itself.

I thought, what a magical, mystical experience I was having. The ecstasy was truly unbelievable, especially when only a few moments earlier I felt the complete opposite; confusion, anxiety and indecision.

Wizard Pond was a couple of hundred feet below and I pretty much ran to the pond and then walked across it. For some unknown reason, I walked west instead of east which was the way home. I knew I couldn’t climb over the sheer rocks, which were eighty feet high, but I knew that no matter what I did, it would make the right and proper choice. I felt I could do no wrong, especially after having seen such a wonderful vision on top of the mountain.

I kept walking along the cliffs, not really knowing why I continued in that direction. I took a few more steps where, suddenly, I noticed a crack in the cliffs that was two or three feet wide. The crack went from the base of the cliff to the top of the cliff in the shape of steps made of stone and tree roots. Despite the abundance of ice and snow, it was easy to climb to the top. I knew the spirit of the eagle was with me and I will never forget the day I saw the spirit on Black Mountain.