Restoring the Stream of Life in Our Rivers

"Reverence brings healing. It is the fulcrum of the great turning
of civilization toward reunion with nature." (Charles Eisenstein)

Rivers are the veins of our Mother. They carry life-giving nutrients to the farthest reaches of a watershed, naturally and effortlessly, providing abundance for all. Sea-run fish become meals for eagles and bears, seals, puffins, whales, cod, pollack, and other species. Lack of sufficient salmon has had a direct impact on Indigenous health and wellness. Rivers should not be blocked. As Brian Altvater of Schoodic Riverkeepers, and REACH's Health and Wellness Coordinator, declares: "The goal is unfettered access." 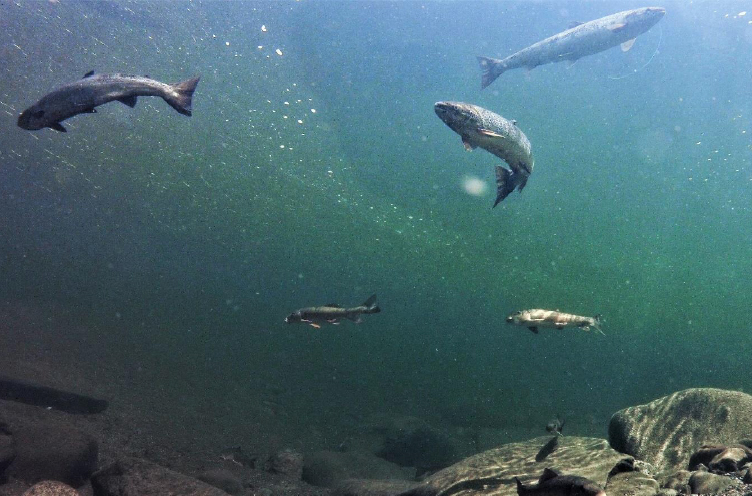 DMR photo of salmon in the Sandy River holding pool

In my town of Belfast, litigation continues over a proposed land-based salmon farm (the size of 11 football fields) where forest habitat now surrounds the Little River. The concept is to stock tanks with baby salmon, to grow and swim in an endless circle under fluorescent lights, until they are harvested for human consumption. Contrast this with creatures who know and need the joy of sunlight, exhilarating exercise, following one's deepest instincts to surmount natural challenges - all in order to get home and procreate, as they were meant to by the Creator. Which would you rather eat? And how much better to remove the dams on the Little River so it can flow freely again.

What follows is a summary of the Maine Department of Marine Resources report on the Kennebec River, with its wealth of information on sea-run fish and the benefits of dam removal.

In December 2020, DMR issued its comprehensive report amending the management plan for the Kennebec River. The life-cycles, and the challenges facing fish species native to these waters, are described in detail. The public outpouring of support for dam removal was precedent-setting. When the report is resubmitted (due to a technicality), Mainers will have another chance to speak up for free-flowing rivers.

The most at-risk species – including endangered Atlantic salmon, American shad, Blueback herring, Alewife, and Sea lamprey – are anadromous, migrating upriver from the ocean to breed in fresh water streams and lakes.

The American eel is catadromous and spends most of its life in fresh water (8-27 years), migrating downriver in the autumn and far out to sea off the Carolinas, where they breed in the Sargasso Sea. After eggs hatch, larvae drift north on ocean currents toward. They become glass eels in the spring. As they move upstream into rivers and ponds, they darken to yellow (elvers, then yellow eel) through the summer. The lack of adequate fish passage affects their restoration. 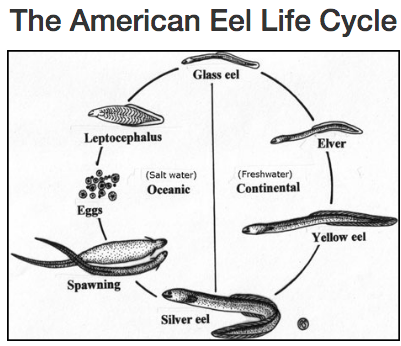 Diadromous refers to fish that migrate in both directions, inhabiting both rivers and the ocean during their life cycle.

DMR's stated goal is to restore Maine's native fish to their historical habitat. The Department report makes clear this will require dam removal – at least 2 but preferably all 4 dams between Waterville and Skowhegan.

Dam Removals on the Kennebec

When the Edwards Dam (above Augusta) was taken out in 1999 and the Fort Halifax Dam was removed in 2008 (where the Sebasticook flows into the Kennebec), Maine experienced a real success story: sturgeon, striped bass and rainbow smelts recovered 100% of their habitat. Fisherman Willie Grenier recently described how he would watch the alewives swarm up the Sebasticook when the Fort Halifax dam came out.

The DMR Report describes the dams currently operating on the lower Kennebec. All four are owned by a Canadian company, Brookfield Renewables:

The Natural Resources Council of Maine (NRCM) estimates that these hydropower projects licensed by the Federal Energy Regulatory Commission (FERC) together contribute only half of 1% of Maine's electricity. Grid-scale solar is fast replacing hydropower as an energy source. In addition to these four, there are at least 40 non-hydropower dams within historic diadromous fish habitat above Lockwood, primarily at the outlet of lakes and ponds. These dams block many species from historic habitat, including alewife from spawning habitat and American eel from growth habitat. 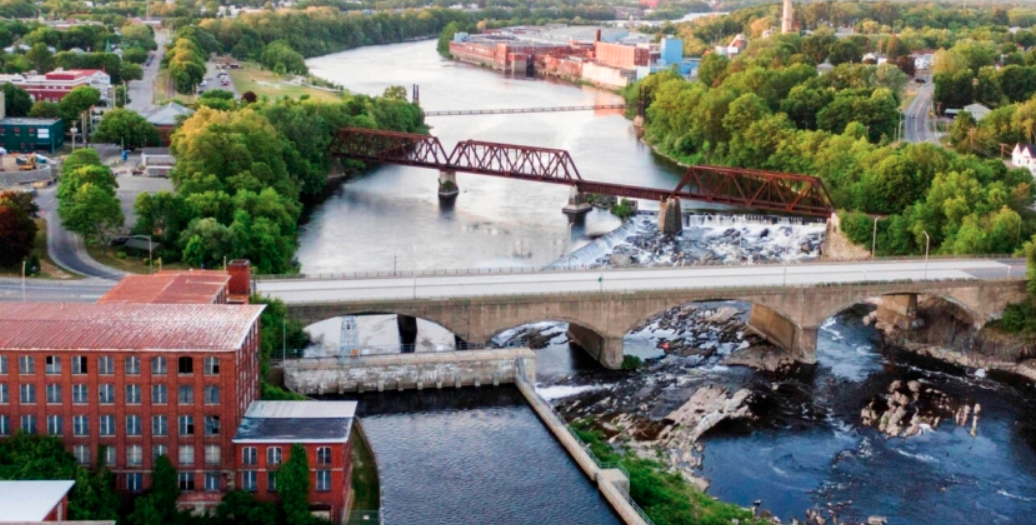 To reach the highest-quality spawning habitat requires a very long journey to the cold water far upstream. Given our warming oceans and increasingly sweltering summers, the need for this habitat is all the more critical if these species are to come back. The Sandy River above the Weston Dam has the greatest biological value in the Kennebec watershed for spawning and rearing young salmon (smolts). Sadly, it is currently only accessible to adult salmon through the trap-and-truck program.

Dam owners are required to provide fish passage, but restoration of Atlantic salmon, American shad, Blueback herring, alewife, and sea lamprey has stalled due to the lack of upstream fish passage. Of the three critical habitat recovery areas for endangered salmon, Merrymeeting Bay (includes the Kennebec, Androscoggin, Sheepscot, Pemaquid, Medomak and St. George) is least successful; Penobscot with its great success in dam removal has the highest recovery; the third is Downeast, which we'll write about this summer.

Brookfield has chronically neglected to develop species protection plans or construct fish passageways that comply with requirements set out in the dam licenses. Upstream passage effectiveness testing is also required, but too often an owner elects to pay a fine rather than take the trouble to comply.

Providing safe, timely, easily navigated fishways would be essential to meet recovery goals. DMR recommends nature-like fishways, urgently needed to operate 24/7 during migrations. These should have no moving parts that could deter, injure or kill fish. A good example is the Howland Bypass on the Penobscot River, which emulates the flow patterns and appearance of a real stream channel, simulating the landscape with natural materials.

But unnatural or non-functional fish passage causes delay, injury, or death. Poor passage at Lockwood leaves returning salmon and shad to die or spawn in subpar habitat. Adult salmon that spend too much time in warm water deplete their fat reserves needed for upstream migration and return to the ocean the following year, affecting reproduction. They can encounter stressful summer heat waves on their journey. Water in fish passageways and in the reservoirs (impoundments) created by dams is warmer, slowing migration. If they do manage to pass upstream, these multiple blockages wear them down, leaving the fish increasingly desperate to reach coldwater refuge. If they are unable to find cooler water they die.

Alewives have limited energy reserves and if fish passage is obstructed or closed, they too are stymied and defeated. Nick Bennett of NCRM has said, "Fish have a difficult time getting through fish lifts and ladders because the opening is small and they have a hard time finding it. Shad can grow longer than 2 feet and weigh more than a watermelon. They get tired and if they are delayed three or four days, they either turn around and go out to sea or they can die from exhaustion."

Contemporary science and traditional Indigenous wisdom dovetail in recognizing the rich and interconnected life of a healthy watershed, with its myriad interactions and exchanges. DMR's study concludes: "Our recommended performance standards for fish restoration are not achievable based on current proposed fishways by the Licensee." Brookfield's own feasibility study in 2019 found, "Removal of these projects (is) determined to be feasible and reasonably practical."

The process of decommissioning and removing dams could last 5-10 years. To take them out would require a purchase deal between Brookfield and the federal government. Still, it seems worth fighting for.

Diane Oltarzewski retired to Maine in 2013 from

Hoboken, New Jersey. She has served on the

Board of Wabanaki REACH since July 2018.