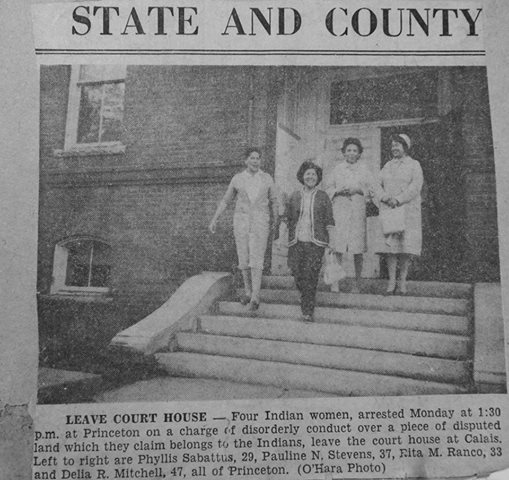 Riding the wave of excitement created by the Women's March in Washington, we would like to recognize movers and shakers of contemporary Wabanaki history.

Passamaquoddy women of Indian Township should be credited with creating the momentum for what eventually became the historic and precedent-setting Maine Indian Land Claims case.

In May 1964, when a local business man set out to build a road through land that he said he won in a poker game, several women of Indian Township stood up to him and asserted that the land was undoubtedly Passamaquoddy land. A sit-in to protect their land ensued. They blocked the road with a canoe and stopped any attempts for gravel, sand or lumber to be moved to the site. Their bold actions resulted in their eventual arrest.

Phyllis Sabattus, Pauline N. Stevens, Rita M. Ranco, and Delia R. Mitchell, four Passamaquoddy women from Indian Township, were arrested and charged with disorderly conduct after "refusing to move from a sand pile at the site of a piece of disputed land at Princeton."

Their arrest and subsequent search for legal representation became the catalyst for the land claims that resulted in the Maine Indian Claims Settlement Act of 1980.

Maine-Wabanaki REACH is committed to truth, healing, and change. One way that we achieve this is by educating about our collective history.