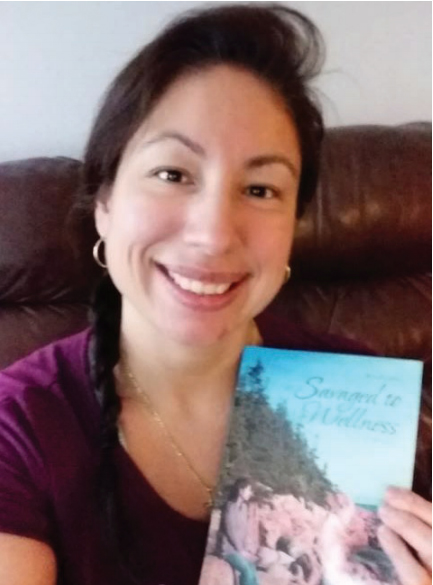 This month's post features an excerpt from Melody Paul’s memoir about her journey to recovery from substance abuse. Savaged to Wellness is a powerful story of healing that was written within the walls of a Maine prison.

Hitchhiking to Maine for the first time, I felt afraid of the unknown, afraid of the change of pace, the change of people, places, things. I mean, I was going to a new country, not knowing anyone, not even knowing streets or towns. I had never even heard of counties before.

It was an early Saturday morning in Cape Breton. There was a light fog in the air, the kind you notice during that peak in the morning. I was ready for change in my life; I had been struggling through some emotional and personal difficulties. As I was finishing my breakfast that my mother usually prepared for everyone, I felt excited and overwhelmed at the fact that this might be the last time in a while that I get to just enjoy a homemade meal. Finishing my coffee, I overindulged more than usual, knowing that I needed plenty of carbs.

In the mind’s eye or one’s imagination, a journey evokes images of sailboats, cruise ships, jet airplanes, or even an Arabian camel. My journey, however, presented no romantic imagery, just a thumb and miles and miles of macadam-paved highways. Yes, I was going hitchhiking from Cape Breton to down east Maine.

My mother wasn’t exactly all right with the idea of me hitchhiking some 800 km to a different country with really no place to stay and no money, but I was determined to survive. After I talked with my mother some more with some details of my plans, I told her that I would call her when I arrived at the Calais border. During one of our family trips, I remembered that there was a payphone at the McDonalds in Calais. I reassured her not to worry, that I would be fine, and to think positively of the situation. You might think it unusual, stupid, and dangerous that a seventeen-year-old girl would hitchhike across two Canadian provinces all the way to the state of Maine. Where I come from, people struggle to survive on a daily basis with limited funds, so there’s a lot of people that hitchhike around. It is just the way it is. Nobody thinks it’s unusual; it’s normal to see a few people on the side of the road with their thumb out.

I have to admit that I was a little afraid at first, but I was also determined to make some changes in my life. I craved change. That’s what ultimately changed the way I viewed things and situations.

So I called my cousin Audrey for a ride outside of Eskasoni so that my parents wouldn’t feel sorry for me walking with my gear and try to change my mind.

I remember how naturally excited I was and how heavy my camping gear was. I had all Coleman gear, tent, cooler, flashlights, etc. It must have weighed about eighty pounds, but back then, I was so used to working out on a daily basis that I was super fit and strong. I walked for the first twenty minutes, thinking about the reality of the situation. I even figured, if I didn’t make it very far, I would turn back and go back home. The first few cars that I “hiked” drove past me. I could see from a distance that they would just shake their heads in disgust, probably because I was a young girl looking like I was running away from home. The reality of the situation though was that I was leaving home but not running away from anything; after all, I did have permission from my mother. She knew my plan.

I didn’t have much luck that first hour; I figured it was so early in the morning. That’s what I figured, at least. The sun slowly started shining through the morning haze, so traffic began to pick up. I had a few cars stop and ask me how far I was going and to ask if I was okay. I just said, “Yeah, I’m okay. I am just hiking Maine, that’s all.” Then I lucked out. The first car was going straight through to Halifax, so that was a good start for me. A young college kid heading to the university in Halifax to start his school year, we shared our stories during the couple-hour drive to Truro turn off.

I started to hitchhike again. Dozens of cars passed by me, going about eighty miles per hour. It was overwhelming. Finally, this tractor trailer stopped. He flashed his signal lights and waved to me. I couldn’t run, so I had to speed walk up to the truck, which took me about five minutes.

Finally, I heard a voice saying to me, “How far you going, dear?” I was like, “I’m going to Maine.” He said, “Well, I’m not going that far today, but I can get you to Sussex, New Brunswick. There’s a truck stop there at my turn off where you could probably get a ride all the way to the US border.”

I was pumped. I introduced myself and I apologized for my gear. He just smiled and told me, “Don’t worry about it, dear.” And he smiled back and took a deep breath. He was interested in talking about why I was hitchhiking and what my plans were. It took me about twenty minutes to tell him about myself and my story. He then talked a little about himself. That’s usually how it went when I was hitchhiking. It was like a mini therapy session. Every time anyone wanted to chat, I would be up front and honest. I rarely met weirdos.

After a couple of hours of driving and talking, I noticed my exit was coming right up. We talked quickly as my exit came closer. He gave me $20 and told me to “be careful and get yourself something to eat.” I thanked him and wished him well.

So it was about noontime. I was excited that I was at the halfway mark. I decided that I would stop to take a break. I walked up to this huge truck stop in Sussex, New Brunswick. I walked in and noticed a nice restaurant/truckers lounge. I ordered a turkey club sandwich with French fries and a large cola. I finished every bit, and I took a walk around the store to stretch my legs a little, paid the tab, and then continued on my way.

I walked down the hill toward the Trans-Canada like I owned the road. I had no fear of doing what I was doing. The dangers of it all didn’t faze me one bit. I had a one-track mind that was to get to Maine that day. I hitchhiked a few cars. They passed by me. I had no luck for about an hour. I walked on the side of the road for a mile at least. I’d get bored and start to sing a song or memorize each car that passed by me to entertain myself.

Then the next few cars that stopped to give me a lift were just going short distances. I took the rides anyway. I was just grateful to be closer every time. It was about five o’clock, and I was about thirty minutes outside of St. John, New Brunswick. I was about four hours away from my destination. The afternoon went by slowly. I began to worry a little that I wouldn’t be able to make it all the way to Maine. I just said a little prayer and continued on my way anyway. I stuck out my thumb for about thirty minutes with no luck. I would walk and then hitchhike until a ride stopped for me.

Then this truck stopped and asked me, “How far you headed?” I said, “Maine.”

Melody Paul is a Micmac native from a Canadian Indian reservation called Eskasoni. She is in her late thirties and lives in Bangor, Maine. Although Melody was born and raised on a small island called Cape Breton, in northern Nova Scotia, she has spent most of her adult life in the United States. Melody enjoys the outdoors, and one of her favorite pastimes is going on nature walks with her son, Anthony. Learning to adapt to change has been one of the many challenges she has had to overcome. During her free time, she enjoys doing service work and helping other peers overcome the obstacles of addiction. While Melody served time in the Maine State prison system, she was able to write her life story. Melody has a new outlook on life and continues to work on herself daily. This is a story of struggle and survival. She hopes that her story will inspire people that are still struggling out there to overcome life’s challenges.

Maine-Wabanaki REACH is grateful to Melody for also sharing her story with the Maine Wabanaki-State Child Welfare Truth and Reconciliation Commission and allowing her statement to be available for others to connect with and learn from. Walalin.