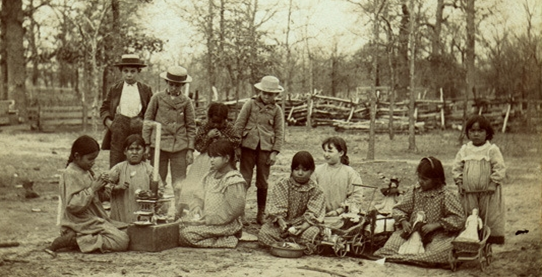 I am a Quaker, working with a small Interfaith Council on Decolonizing Faith.  We have recently offered a workshop on “Colonization and the Role of the Churches” with plans for future offerings.  As part of our work we have invited a Quaker, Paula Palmer to visit Maine and share her research into Quaker involvement in the Indian Boarding Schools, as a model for other religious groups to do similar work.  The Indian Boarding Schools had the express aim of “Kill the Indian, Save the Man” and were run by various religious groups.  Not only did they try to eradicate all traces of indigenous identity and culture, the children often suffered physical and sexual abuse – many died in the boarding schools.  Our churches were a part of the colonizing attitude of European Christian superiority which assumed a natural right to impose its values upon whatever land and peoples it encountered and to take what it wanted in the process.  The questions are “Who are we today?” “Who do we want to be?”  “Will we join in honest exploration of our churches’ roles in colonization of this land and its people?” “Will we seek ways to contribute to healing and building new relationship?”Every religion places an emphasis on truth and integrity.  As people of faith, something we have to face, is the truth of our churches’ involvement in the devastation of indigenous peoples.  It’s a wound and an injustice which calls first for honest acknowledgment that it happened and then for repentance, work toward healing, and building of new relationship.  We are in the Christian season of Lent when often the focus is on “giving up” something, but the Hebrew word “teshuvah” literally means “to turn”.  Once we were going this way, now we have decided to turn and go another way.   We are called “to turn” and “go another way” in our relationship with the native people of this land.  Our churches have work to do to look at the part we played for instance as Indian Agents, as directors of Indian Boarding Schools, and also to look at how our theology perpetuates a religion of empire and domination rather than a religion of equality and mutual respect.

Penobscot woman, Maria Girouard speaks of the Seven Fires Prophecies within her native heritage.  The prophecies speak of eras through which native peoples were going to have to live, with each era being one of the “fires”.  The seventh fire speaks of a time when the world is physically and spiritually polluted, but beyond that there is a great hope prophesied, a time of great healing.  “Many” she says “believe we are entering the time of the great healing now, but the great healing is not a spectator sport.  It’s a critical call to action.  All peoples, of all races and religions must come together and work for the good of all.  And in order for any change or healing to take place the truth must be told, and received by compassionate ears.”

Paula Palmer’s presentation “Quaker Involvement in Indian Boarding Schools” is open to the public and is on Tuesday April 18, 7:00 p.m. at Jewett Hall, UMA.

Paula will lead an interactive workshop, “Roots of Injustice, Seeds of Change,” on April 19 at 6:30 p.m. in Orono.  To register for this workshop, go to: This Link