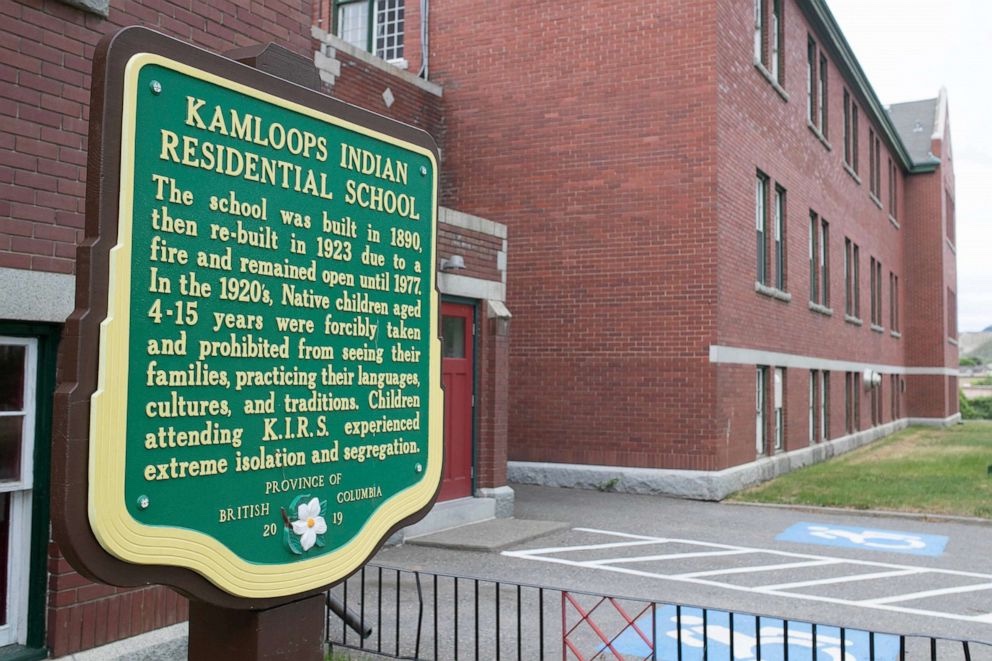 In May, 2021 the Tk’emlups te Secwepemc First Nation of Canada announced that they had discovered the bodies of 215 children buried on the grounds of the former Kamloops Indian Residential School, which had operated from 1890 through the late 1970s. Kamloops was one of hundreds of similar schools across Canada and the U.S. in operation in the 19th and 20th centuries. The unidentified bodies at Kamloops are likely a small fraction of those that are yet to be found but are certainly not the first such discovery.

It’s likely that this news was met with horror, grief, and many other emotions by many Native people, but not with surprise. As Ojibwe journalist Mary Annette Pember has noted, “[i]ndigenous people on both sides of what Native people call the medicine line—the border between the U.S. and Canada—have been reckoning with the residential schools’ traumatic repercussions for generations. They lie underneath our collective psyche, waiting to be unearthed.” (https://www.theatlantic.com/ideas/archive/2021/11/native-american-boarding-schools/620760/).

On the other hand, judging by media coverage over the summer and by conversations I’ve had, many non-Native people were shocked to learn about these burial sites and further, about the deeply troubling stories of kidnapping, abuse, neglect, and intergenerational trauma that surround them.[1] This gap, the distance between knowing and not knowing these stories, is a painful space. I’m moved to ask, what conditions have allowed for this chasm to endure?

The children who survived the boarding schools, bearing scars on their bodies and in their hearts, and the children and grandchildren of survivors have been carrying the heavy load of this history, while many of us non-Native people have had the luxury of ignorance. We have directly benefitted from the colonial systems these schools served. Non-Natives’ shock and outrage about the recent discoveries of lost children’s bodies is yet more painful evidence that some of us are sheltered from even seeing the harm that indigenous people have borne, disproportionately and with such grave consequences, let alone taking responsibility for the processes of reckoning and healing that are now urgently necessary. As the journalist Pember goes on to say, “[t]his history will continue to resurface until our governments, institutions, and non-Native people fully reckon with it.”

As for governmental reckoning, in June, Interior Secretary Deb Haaland, the first Native person to serve in this role, announced the Federal Indian Boarding School Initiative. An April 1, 2022 deadline has been set for the Initiative to provide a report detailing what is known about burial sites at former boarding schools and the identities and Tribal affiliations of those who are buried there. In November, the Interior Department conducted three consultations with Tribal Nations, Alaska Native corporations, and Native Hawaiian organizations to gather input on how to protect sites and any remains that are discovered in this fact-finding effort. In addition, according to the Interior Department, work is underway, with the input of the Indian Health Service, to develop resources for supporting those whose trauma may be stirred by this initiative. In December the National Native American Boarding School Healing Coalition (NABS) became an official MOU partner in the Initiative and committed to contributing their expertise and sharing evidence they have gathered through a decade of independent research.

NABS has called the Initiative “an important first step” and continues to call for the passage of the “Truth and Healing Commission on Indian Boarding School Policies Act,” S. 2907 and H.R. 5444,[2] that would establish a formal Commission to undertake more extensive investigations, gather testimony, and present a final report with recommendations. The National Congress of American Indians (NCAI) has also called for the establishment of the truth and healing commission, as noted by Juana Majel Dixon, NCAI Board Secretary and Traditional Councilwoman of the Pauma Band of Mission Indians, who recently stated that “[o]nly through a formal investigation which includes meaningful consultation with Tribal Nations and significant input from survivors and their descendants, can the U.S. begin to reconcile with the past and can tribal communities begin to move toward healing from the egregious abuses which occurred.”

As the groundbreaking work of the Maine Wabanaki Child Welfare Truth and Reconciliation Commission (TRC) has shown, healing for tribal communities, and the structural change and allocation of resources that this requires, must remain at the center as governments, institutions, and individuals take next steps to uncover and respond to difficult truths. The priority must be to care for those who have already been harmed and to prevent the additional harm that is possible when truth-seeking processes are not handled with care. The theft of hundreds of thousands of Native children during the last century and a half has resulted in extraordinary historical trauma. Dr. Maria Yellow Horse Brave Heart defines historical trauma as “...the cumulative emotional and psychological wounding over one’s lifetime and from generation to generation following loss of lives, land and vital aspects of culture.”[3] Acknowledgement of historical trauma is critical to counter the racist tendency to blame responses to this trauma on individual and cultural shortcomings. The TRC’s work started from the fact that this tendency has been most visible in the treatment of Native children and families in the child welfare system. This system is in many ways the direct legacy of boarding schools, functioning to carry out the mandates of colonialism (genocide, assimilation, appropriation). With this context in mind and building on the work of the TRC, REACH continues to keep care and healing at its foundation, guided by the principle of “Truth, Healing, Change.”

As I reflect on my relationship to the truths of this history, and what healing and change can look like, I am moved to question what has been passed from generation to generation by the descendants of settlers. What kinds of cultures and beliefs allowed the white non-Native people who ran these schools to steal, abuse, and kill Indian children? What has allowed us and our ancestors to condone and/or ignore what happened at schools like Carlisle, Kamloops, Shubenacadie? And critically, what does healing and responsibility look like now, for non-Native people who may just be opening our eyes to the truth of this devastating history? How do we engage in equally deep, meaningful, lasting change work without shifting resources and the spotlight to our own necessary transformations? As non-Native people, we must also be willing to look through our generations for the truths that can make us whole, make us into people and communities that will never again stand for the theft and murder of children, the attempted genocide of our fellow human beings.

The thread that runs alongside historical trauma is the steadfast commitment to preserve families, communities, languages, and knowledge in the face of unrelenting adversity. It is my responsibility now to find the thread that runs alongside the painful history of colonial abuse, the current that contains the best of who I can be in relation to the earth and all its beings, and to pull that thread through.