Over a century ago, a Penobscot elder named Newell Lyon was visited on Indian Island by anthropologist Frank Speck, from the University of Pennsylvania. Together, they carried out linguistic and cultural research, and worked to devise the earliest writing system for the Penobscot language. One result of their work was the publication in August 1918 of Penobscot Transformer Tales, a series of stories about the Wabanaki culture hero Gluscabe. 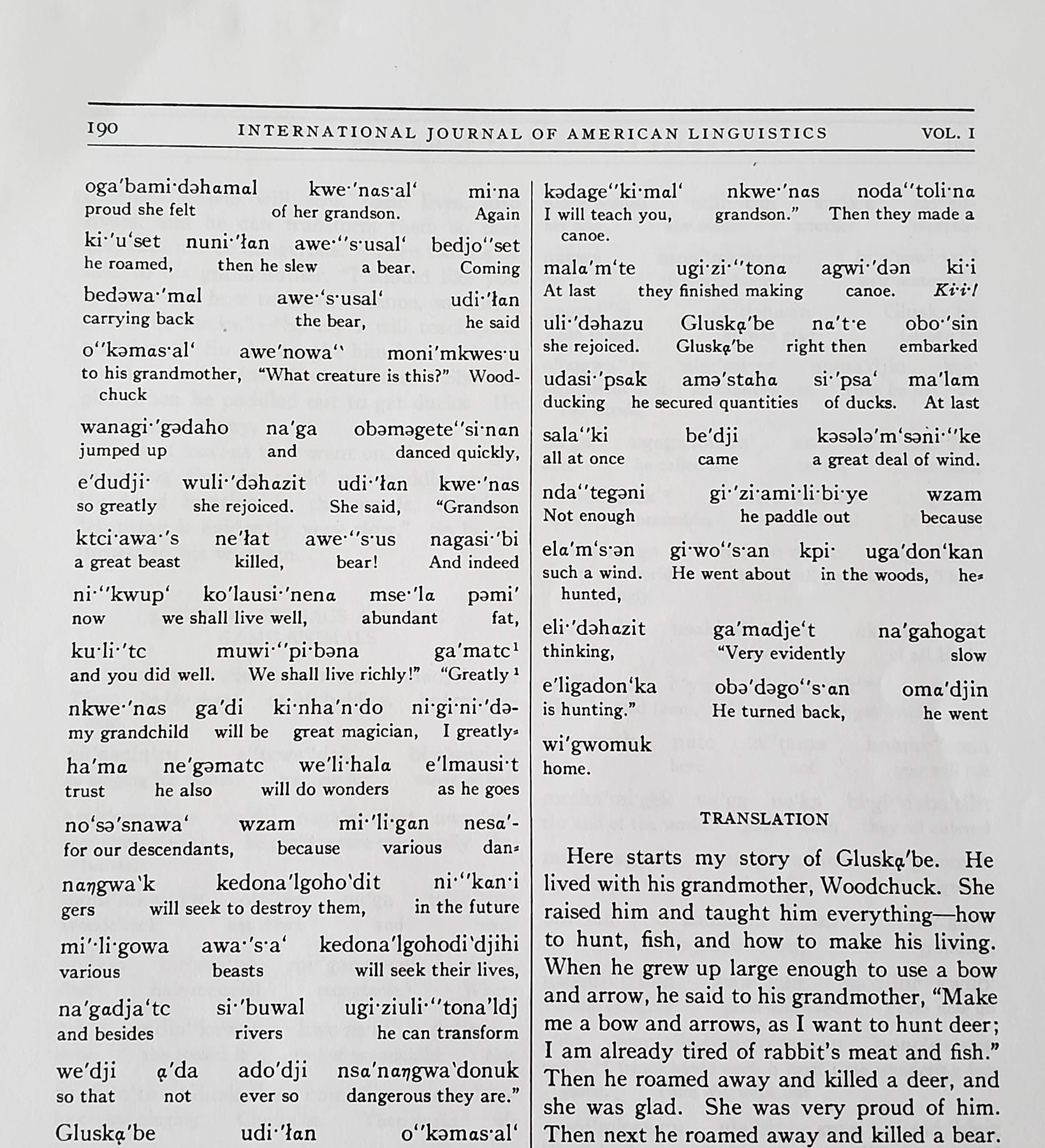 I have been working with Margo Lukens to produce a modern version of Transformer Tales. The first volume of 13 tales will be published shortly by University of Massachusetts Press. The new book will include the original Penobscot of Speck and Lyon, the English translation, and the full text in modern day Penobscot. Dr. Conor Quinn, linguist at USM, has collaborated with us in re-writing all those stories into contemporary Penobscot.

Throughout the stories, the theme of the teachings is Balance. In the telling, Newell Lyon consulted Penobscot elders to verify and enrich details. The fact that he worked in conjunction with his elders speaks to me, because we never operate alone. If we listen well to our elders throughout our life, we will have learned many things. I do this even today.

The springboard for the teachings comes from Gluscabe's Grandmother Woodchuck. Her wisdom guides him through the many adventures described in the Tales.

One afternoon, Margo and I were talking about Gluscabe being told by Grandmother Woodchuck about Winter, how it was being so cruel to the people who couldn’t hunt and often froze to death or starved. Gluscabe went to see the Old Man in the ice house, who mocked him and froze him out. (Because he is Gluscabe and has so much power, he revived and came back with a plan.) In the midst of this discussion I began crying because our people have been frozen out of society for how many years, four hundred? 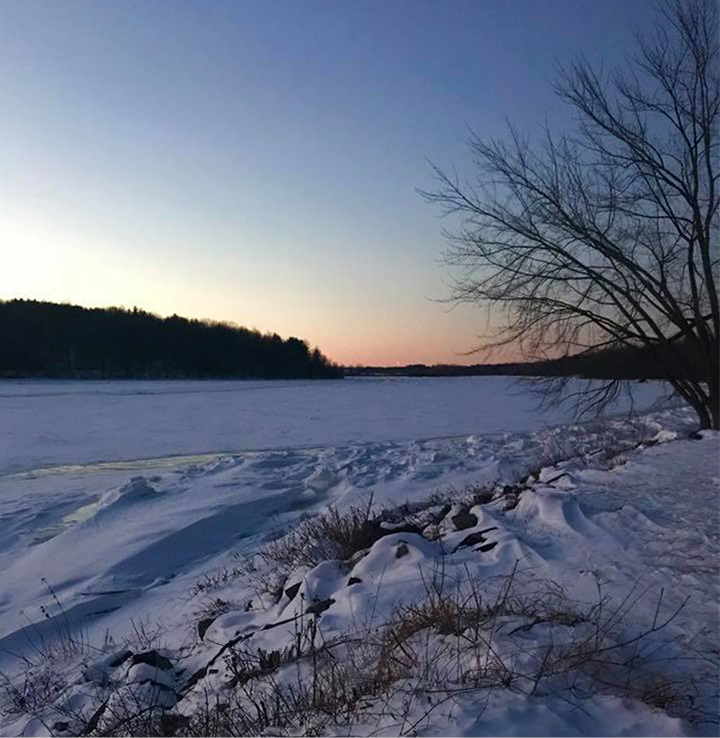 Gluscabe had gone to find Winter on Grandmother’s behest: "Majamto!" (he is very cruel), she cried, "and people are starving." Eventually Gluscabe followed through on his plan to get Summer and bring her into the ice house. (Although there is no gender in the Penobscot language, I imagine Summer to be a female spirit; in other stories, she’s Queen Summer.)

Gluscabe, in turn, mocks Grandfather, who says, "Tapahmalsi!" (It’s too hot, Grandson!) Grandfather and Grandson are terms of respect. Eventually Old Winter melts and that’s how the season of Summer came to bring balance to the year.

I love these stories because they talk about power and remind us of the power we have. It’s always about Balance, even in the case of The Giant Frog. It was his job to guard the water, yet he got carried away and grew bigger and bigger by keeping it all to himself, while people were dying of thirst. "Why do you enfeeble our people?" Gluscabe asks.

Transformer Tales are stories of conservation, and considering those generations yet to come when we make our decisions today. Sometimes we have to think of what is opposite to get the meaning of what the values are, as in Grasshopper Steals All the Tobacco. Hoarding goes against the cultural value of sharing available resources with everyone, so no one is left out.

That original Penobscot writing system was changed and greatly expanded through the efforts of Frank Siebert (1912-1998), a doctor and self-taught linguist. As a young student, Siebert began visiting Indian Island in the 1930s, writing down language from our people — at a point when people had stopped talking their language, or it was on a decline due to assimilation. The people who lived upriver came down to the island because the state was restricting their hunting and trapping. The big wigs in the tribe went door to door and told people: "We have to talk English now and work in town. Never mind making baskets." And they did. I worked with Frank Siebert from 1982 to 1985 on creating a Penobscot dictionary with 15,000 entries, and it is his writing system that I had the tribe adopt as the official language of the Penobscot Nation through a Tribal Council motion and vote in the 1990s.

Today, a contemporary, English-entry Penobscot dictionary is being produced that will expand understanding of our language. See also: https://www.penobscotculture.com/index.php/language-resources

Transformer Tales carry ancient teachings to us in Penobscot. Stephen Krashen (a linguist specializing in second language acquisition) says that if you can read in a language you can speak it. This new edition will be a resource for our people into the future.

Some day I would like to see animations done of these stories, with full text in the Penobscot language. The stories will speak to us differently at various times in our life, yet they are timeless. We plan to create a second volume of stories, once we've brought this first volume to life. 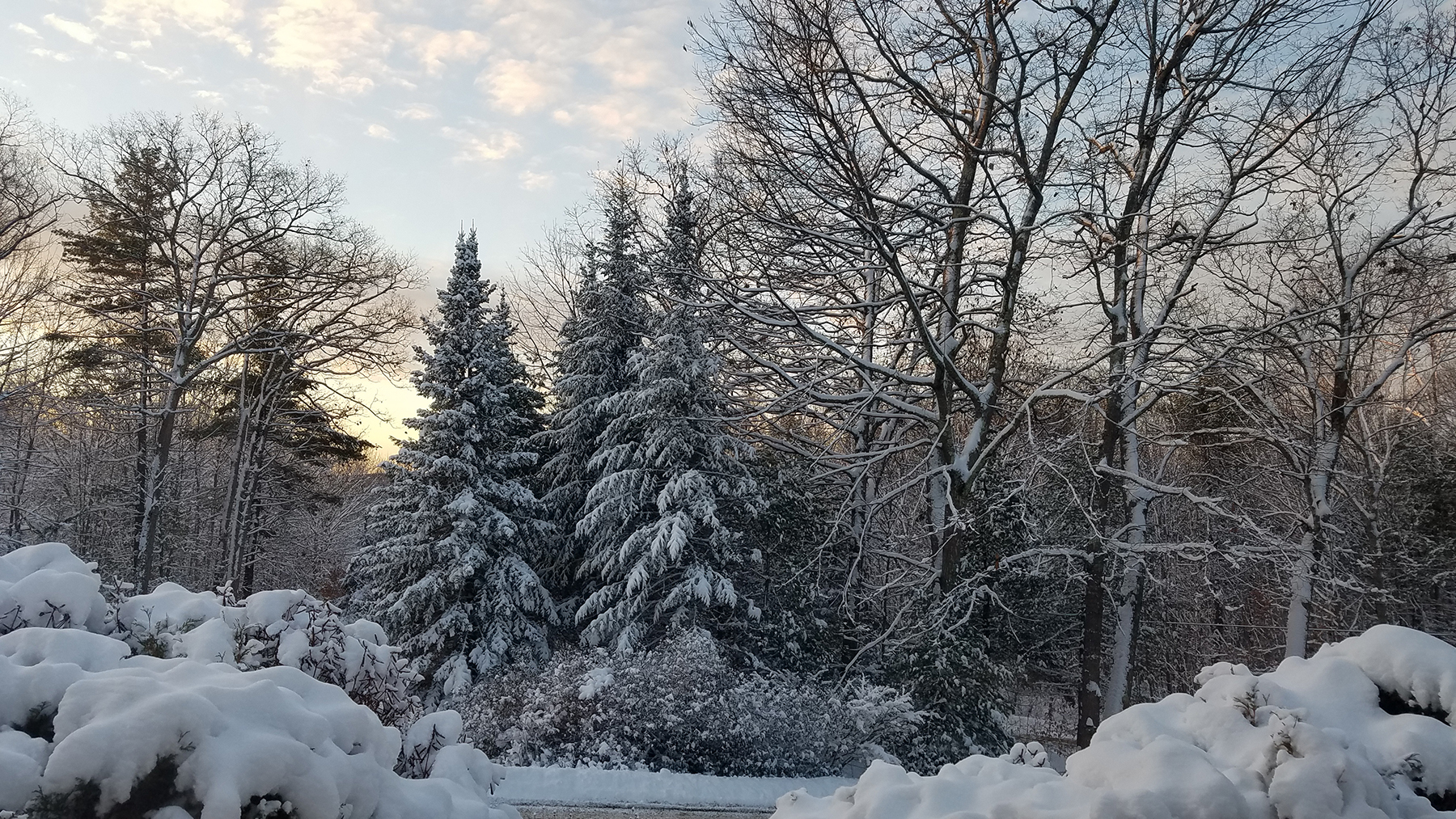