In April 2021, James Manley kindly agreed to be interviewed about his creative process and the paintings he has so generously shared with Wabanaki REACH.

James Manley is an inmate at the Maine State Prison in Warren. He is also the creator of many strong and beautiful images, which he is pleased to share with the world and gives permission to show the two presented here.

Born in 1959 and raised in Worcester, Massachusetts, James' father passed down some of the Tribal knowledge and traditions of his Iroquois heritage, but there was not a Native community in Worcester to practice ceremony.

It was during a stint in a Massachusetts prison while he was in his 30s that James turned his hands to artwork. Using the only materials available to him - fallen slate from a roof, a screw, and a fingernail clipper to carve with - he created regalia for a Native circle at the prison. The only paint available to him was white or black, so he would crumble crayons into the white to create additional colors. A legal team presented these regalia as evidence in a lawsuit they won in 2002 granting inmates the right to hold sweat lodge ceremonies.

After his release, a relationship brought him to Brunswick, Maine where he lived for 9 years, doing some pencil drawing in this period. In 2010 he was imprisoned in Maine, where he took advantage of an art class and began painting in 2011. He joined a circle for incarcerated Natives and created 1 or 2 paintings a week to share with others and enrich the circle experience.

James talked about the impact of the pandemic on his life - how the valuable Wabanaki REACH peace and healing circles led by Roger Paul and Sandra Bassett had to be suspended, and how no sweat lodge ceremonies could be held. He was fully vaccinated in March and looks forward to resuming normal classes and studio time after 15 months of forced inactivity. The classroom building has been reconfigured and has yet to open where his painting of Geronimo awaits, only one-quarter finished.

In response to the pandemic, the inmates produced over 250,000 masks. At the end of March the industrial program resumed, and the inmates are back at work on weekdays producing wooden toys, tools like oyster-shuckers for restaurants, boats, and cabinetry that are sold in Thomaston. James makes loon and puffin carvings that become lamps. Working in the shop provides him with spending money.

In normal times, he could spend 2 hours each weekday during recreational period to join an art class taught by another inmate. Usually there are 6-8 people in class at a time, and they all contribute suggestions and techniques freely to one another. On weekends, he is sometimes able to enjoy up to 8 hours of studio time, working on several canvases at a time. 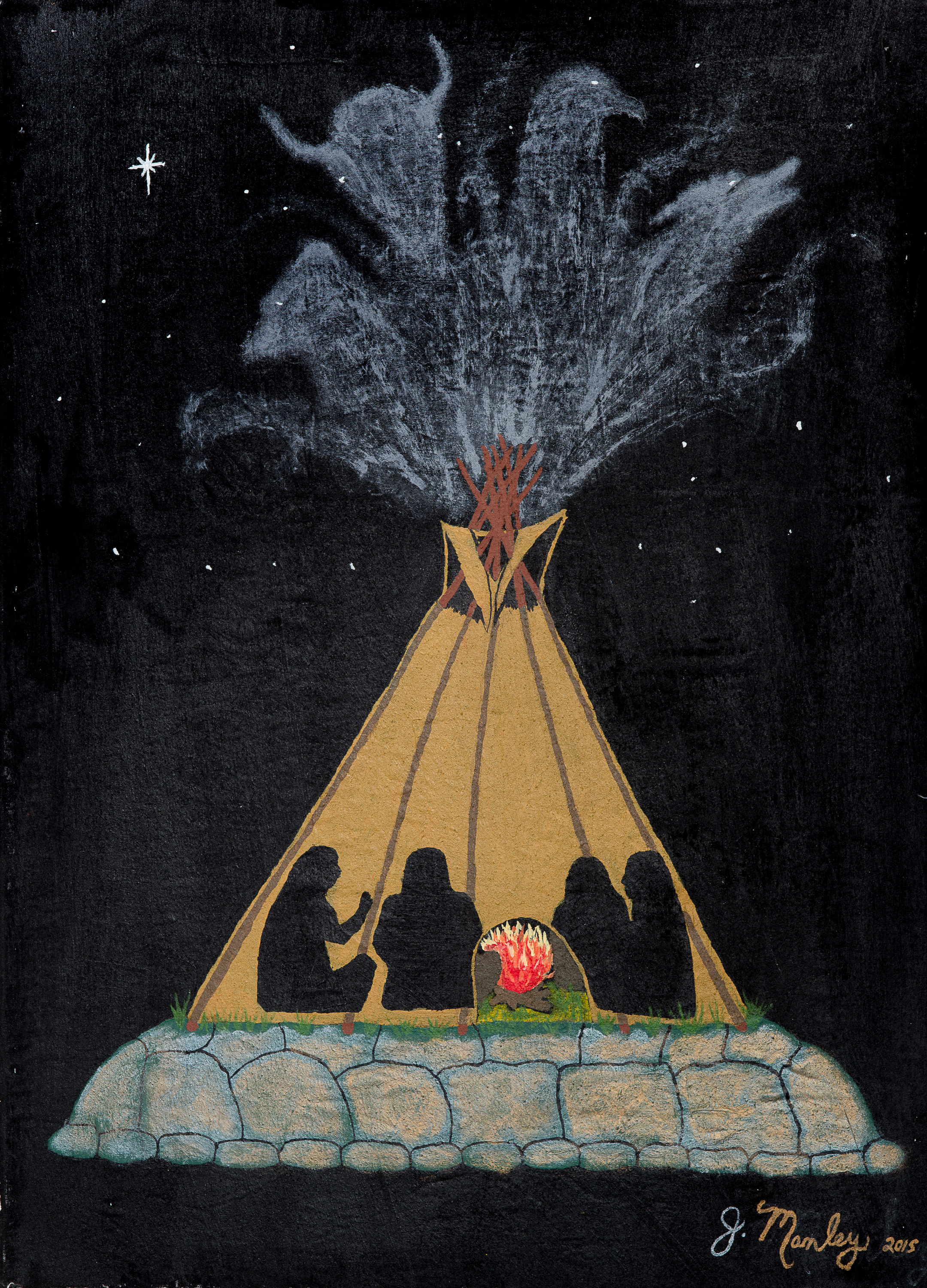 Happily, the Maine State Prison provides paper and canvas, paint, brushes, and colored pencils. James doesn't title his pieces but the two works pictured here were done in 2015 in acrylic, which is his favored medium because "oils take too long to dry". The smoke arising from the tipi represents the Four Directions: bear (West), buffalo (North), eagle (East), and coyote (South). Previously, he had used bed sheets, backed by plastic boards: "I could make 4-6 paintings out of one sheet,” he says.

James has expressed his gratitude to Wabanaki REACH by contributing several pieces of his artwork for our Restorative Justice panels. His images have graced Wabanaki REACH forgiveness cards, and he has sent 10 or 11 paintings to the Indian Island School. 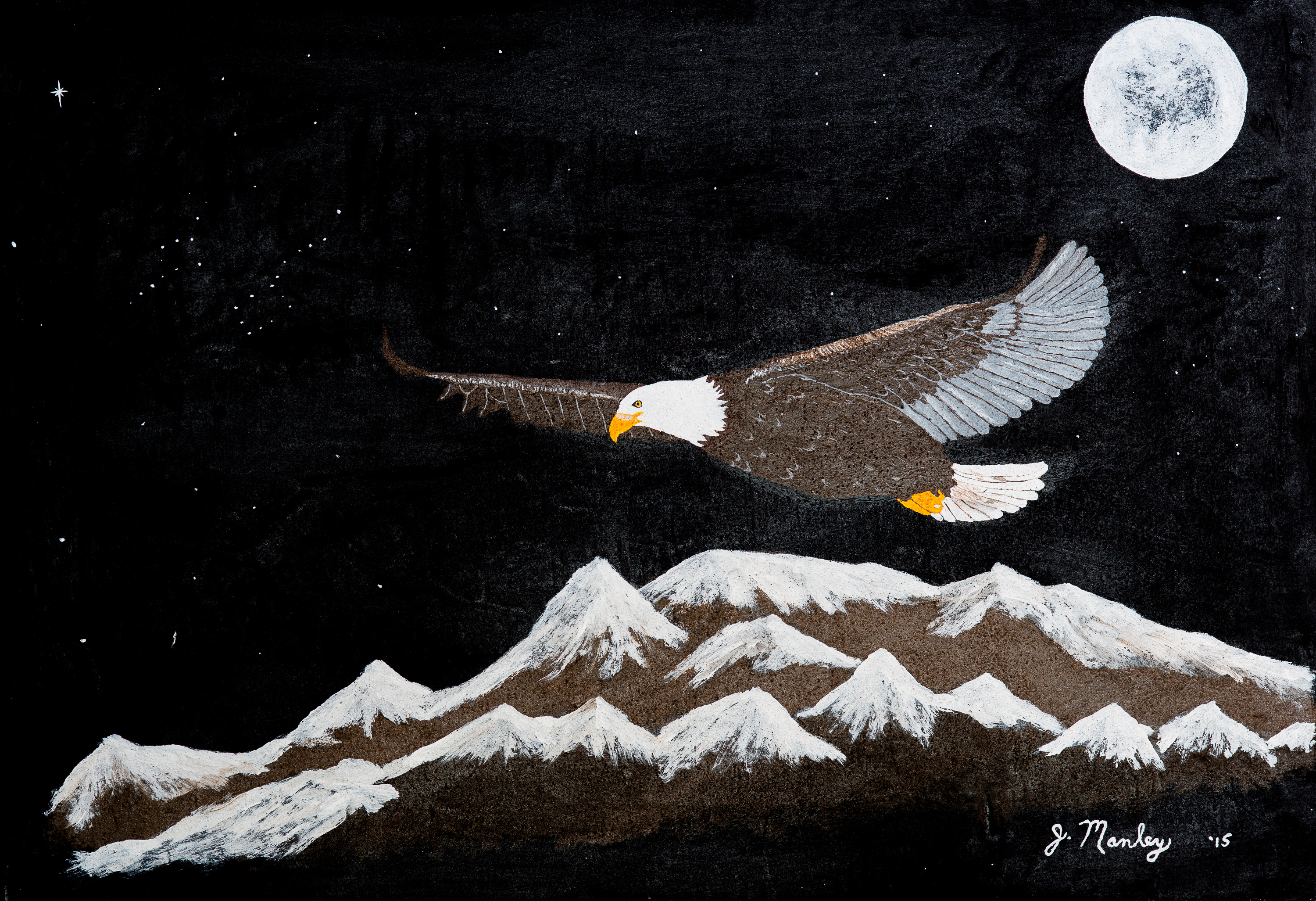 James Manley is living proof that we are so much more than our bad decisions.