A Conversation with Skutik Riverkeepers

Restoring the Stream of Life in Our Rivers - Part 2

The source of the St. Croix (or Skutik) River is Monument Brook and North Lake, along the international boundary in Maine and New Brunswick. Flowing south to the Bay of Fundy and Passamaquoddy Bay, the river's management of water quality, aquatic life and fish passage requires international collaboration (the International Joint Commission, St. Croix River Board).

In July I had the privilege of speaking with current Passamaquoddy Riverkeepers Brian Altvater (Wabanaki Health and Wellness Coordinator for REACH) and Ed Bassett (of Sipayik Environmental Department) about the state of this massive watershed.

Prior to my trip, Ed had provided a map showing the location of the many dams on the river, its lakes and streams: 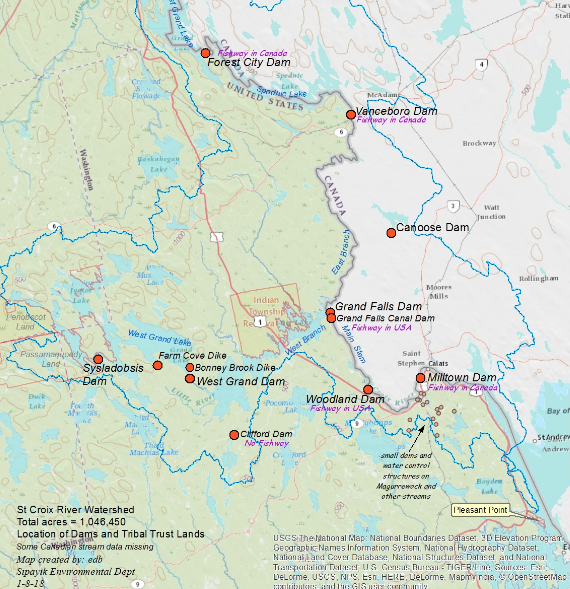 Using this map, I started at the top - the Forest City Dam, owned by Woodland Pulp LLC) - and worked my way down the river. Given the controversy over who will ultimately be responsible for code-compliant fishways (Woodland wants out, and the state has declined to take over regulation from FERC), I expected to see a large, imposing dam. Instead, I found a narrow, modest wood+stone structure built over a century ago. It is non-hydro, but its water control links it to Woodland's power production downstream. (Released water also mitigates pollution from the mill.) 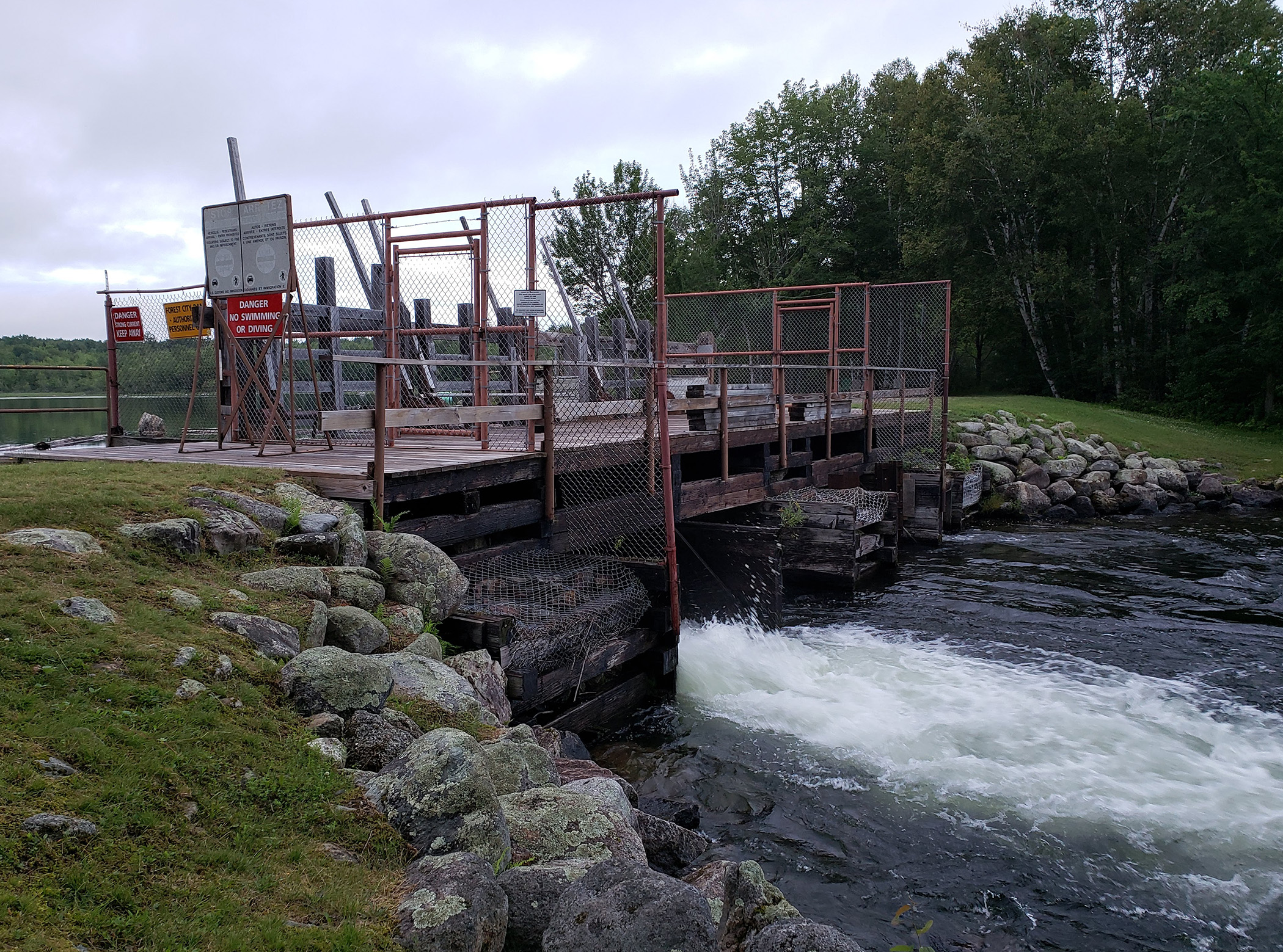 Early settlers built hundreds of these wooden crib dams. Ed and Brian spoke highly of Steve Koenig's work with Project Share, which works to pull out the old crib dams, plant trees, return logs and rocks to the streams, and restore a more natural environment.

Above the dam, the glacial East Grand Lake spreads broadly toward Skutik's source just to the northeast.

Though the St. Croix watershed has enormous carrying capacity and is a designated habitat recovery area for Atlantic salmon, there have been no returning salmon since the late 1990s. The intense pollution from the Woodland Pulp mill near Baileyville is partly to blame; however, Ed stressed that settler logging destroyed salmon habitat by clearcutting the banks (no more shade); farming toxins unobstructed by forest buffer run right into the river. "From Woodland on down, it was nothing but a big cesspool. It's come a long way since the '90s because of water quality standards and fishways, but it's really been a nightmare for fish passage."

Continuing downriver, the Vanceboro dam is hydropower but supplies less than 1% of energy to Woodland Pulp (natural gas now its main source of energy). A 19th century Maine gazetteer describes the town: "The St. Croix log-driving company have a dam here. The manufacturers in Vanceboro consist of leather and a clothespin + spool factory. The tannery is owned by F. Shaw & Bros. and produces 500 tons annually of dry sole leather. The settlement has a public library of 75 volumes." 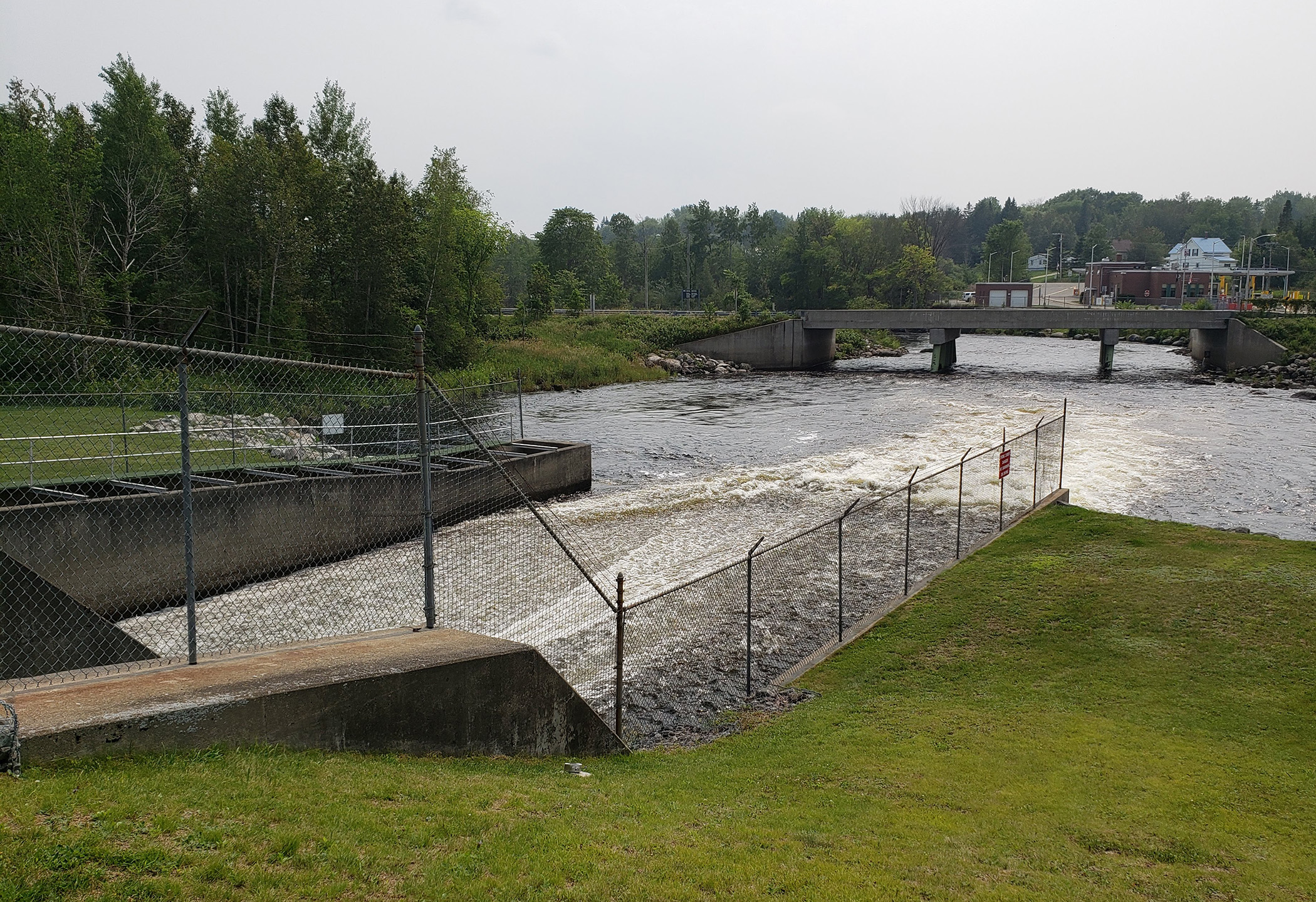 At the Vanceboro dam (above), Ed confirmed the cement structure on left side of the tailrace is a Vertical Slot Fish Ladder.

Next, a long dirt road led me to the Grand Falls Dam circa 1915 (and the Grand Falls Hydrostation on an adjacent canal), both regulated by the State of Maine. The approach road goes along the Grand Falls flowage through Motahkomikuk territory. Brian told me that dam construction here flooded 6,000 acres and radically altered Passamaquoddy land, submerging some islands, and creating others.

How ironic then to hear government officials, lake communities, and sports fishing guides react against "sweeping change" or a perceived threat to "their" natural world by dam removal. How can they fail to acknowledge - to let in even a flicker of clarifying light - the sweeping changes to the natural environment imposed upon Wabanaki people down through centuries? 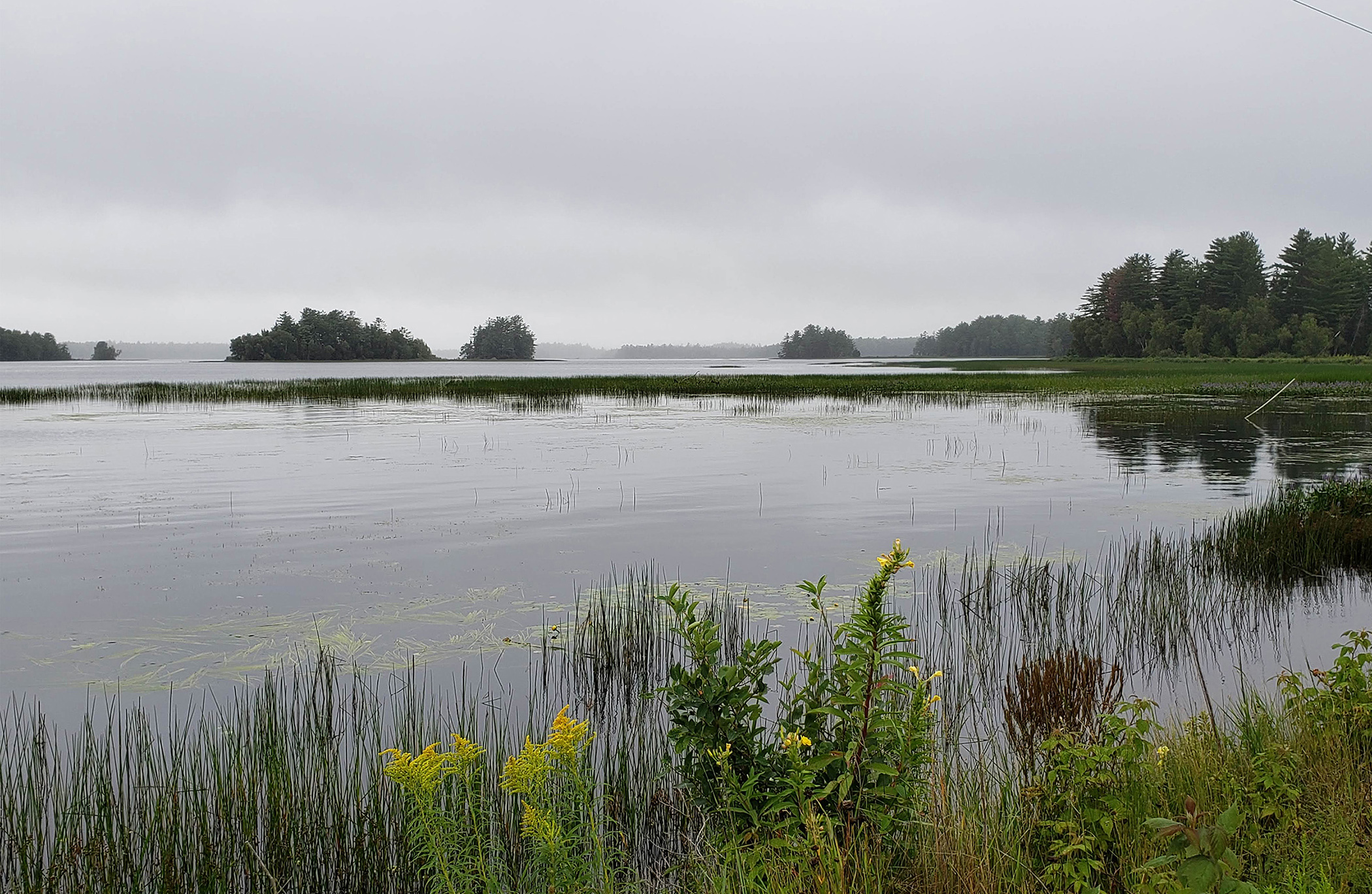 At the Grand Falls Hydrostation, there is an old log sluice used for downstream passage of juvenile alewives. However, Ed explained that the fish need it to stay open longer than it does. 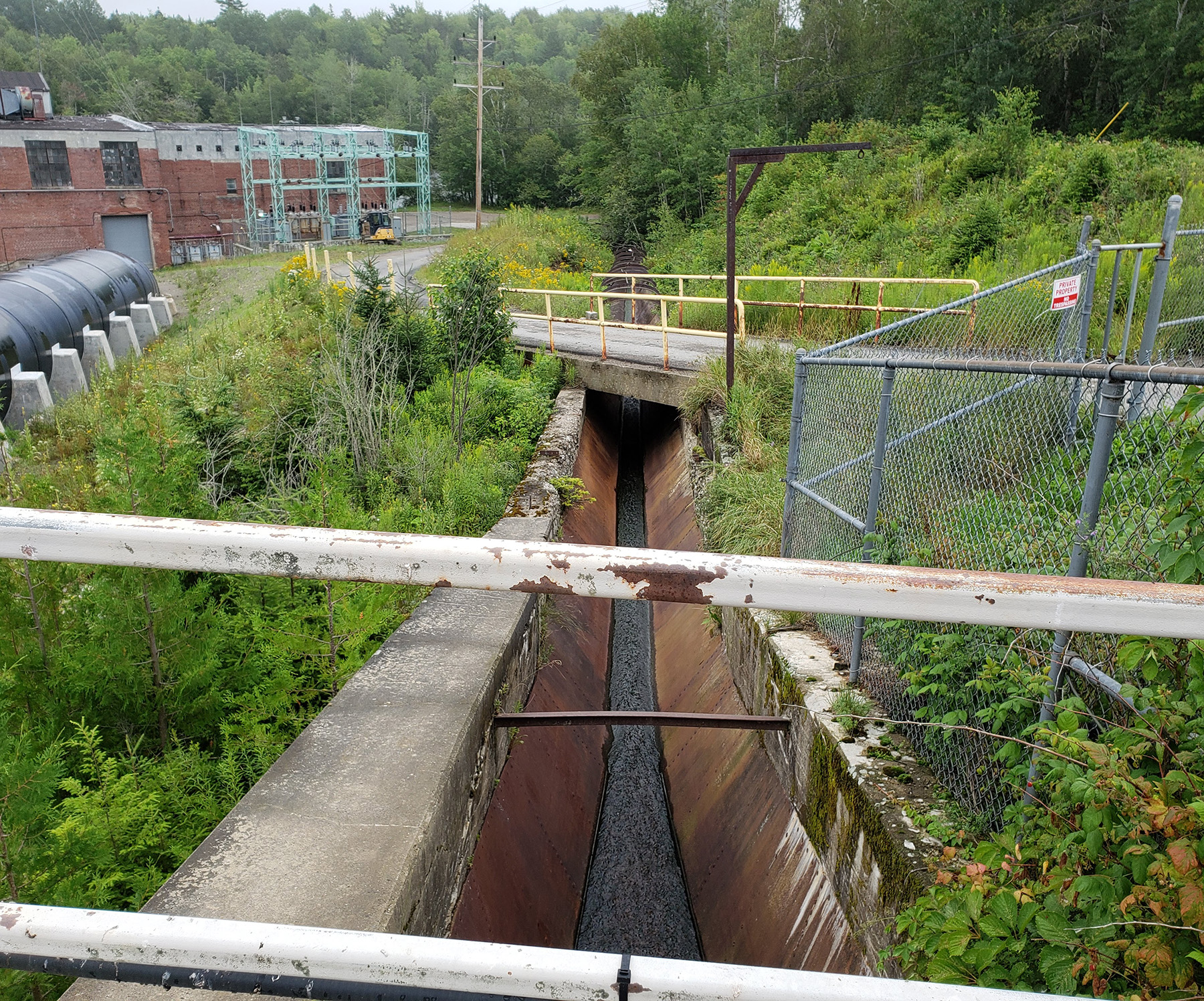 Below is the 3-story fish ladder for upstream passage. The Passamaquoddy are the ones doing the monitoring, to the best of their ability, as the state's monitoring is inconsistent; Maine has neglected to create more effective natural fishways here. 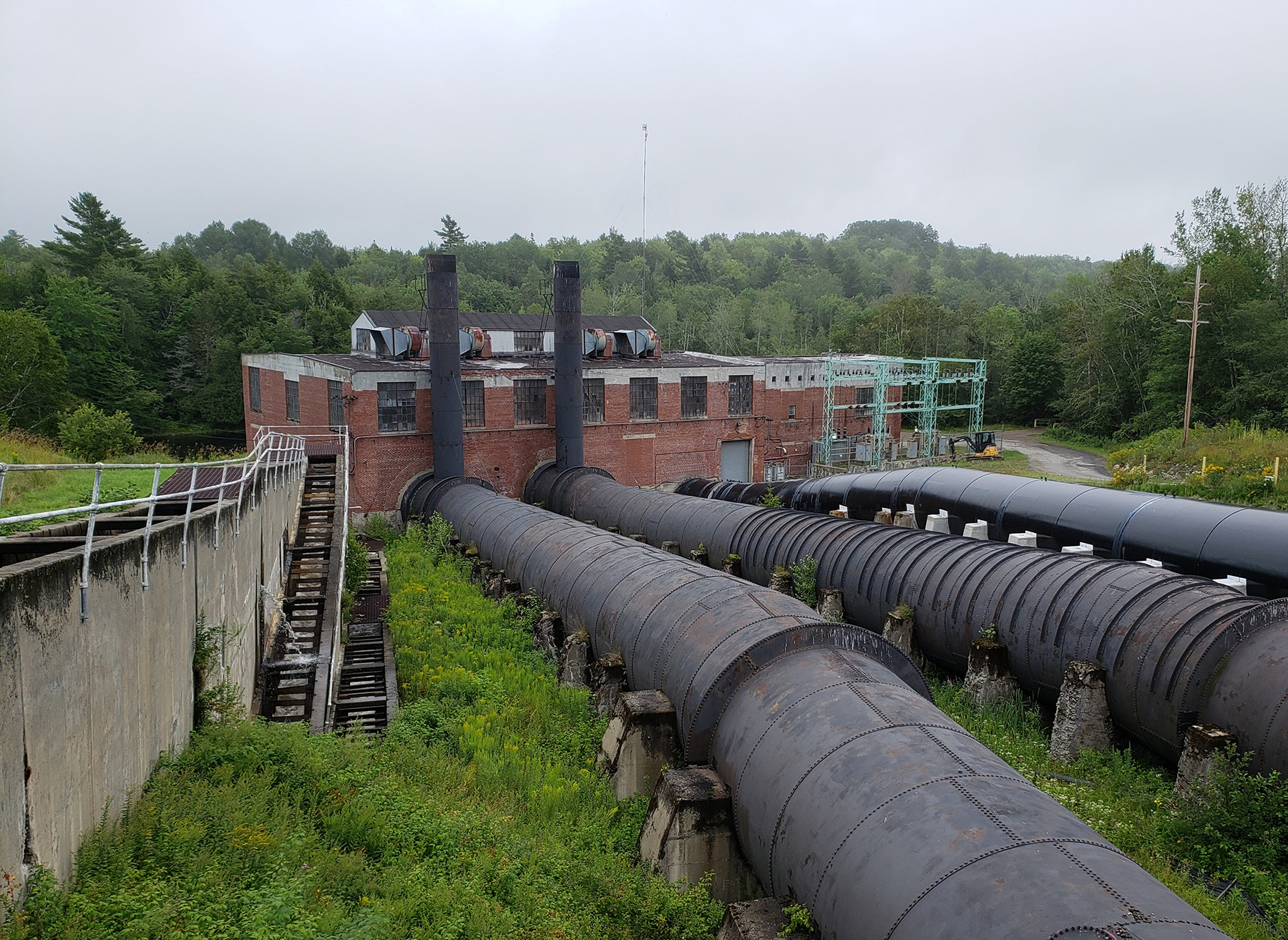 Driving through Woodland Junction, one sees a prettified community overhung with the stench from the pulp mill. Acres of felled trees are piled stories-high like city blocks, evidence of ongoing clearcutting, though hopefully more sustainably managed today. There is no public access to the Woodland dam.

Continuing downriver, I came to the Milltown Dam above Calais, built 1887 at Salmon Falls to power a cotton mill. It was taken over by New Brunswick Power, with a new 1980 fishway on the Canadian side. 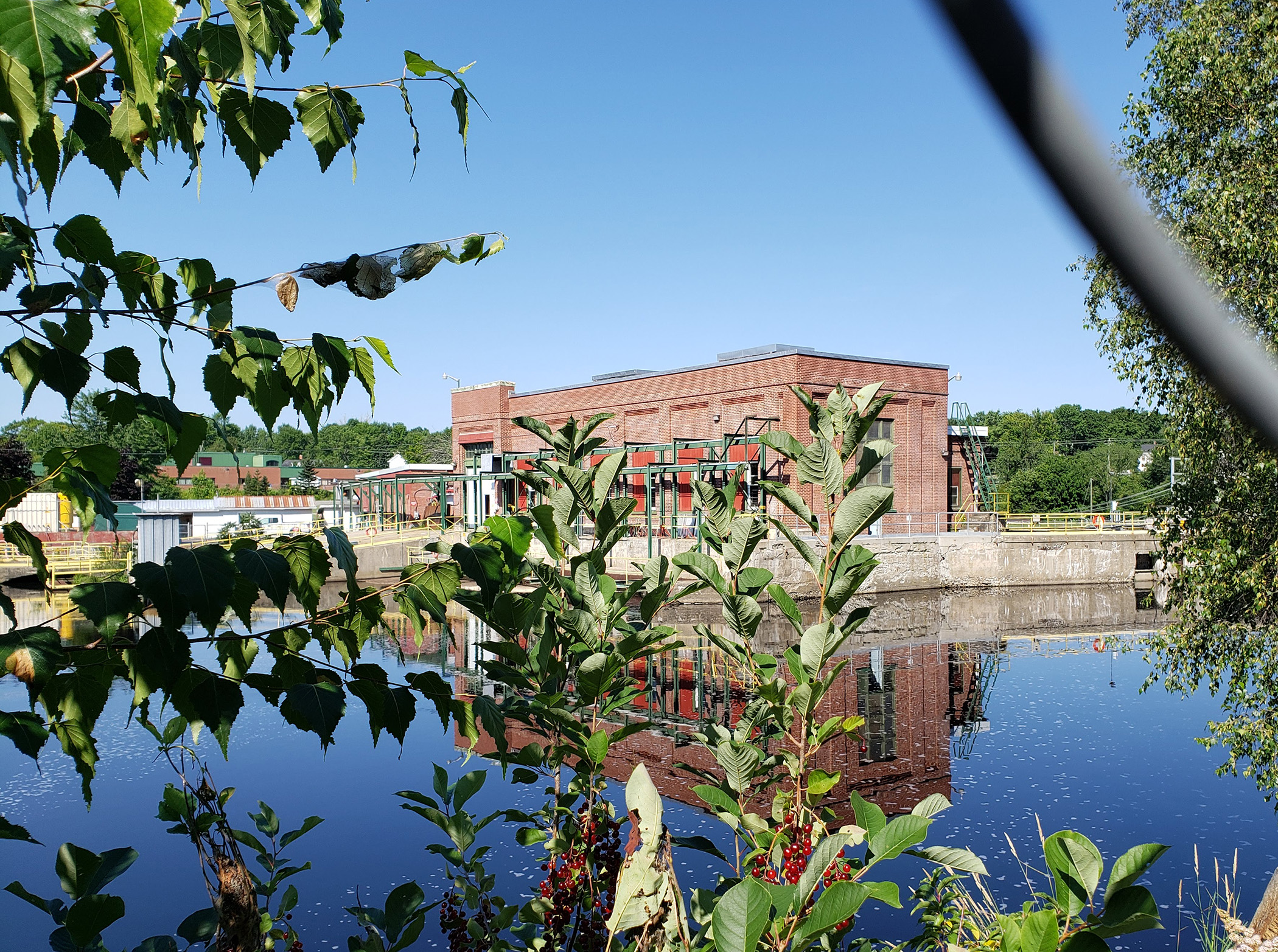 Yet the fish still have difficulty finding the entrance, and are too often injured or killed by the turbines. The very good news is that Milltown is slated for removal by 2023!

As we sat on the rocks below Sipayik in the early evening, Brian recalled fishing there with his dad, circa 1970, and catching four-foot cod and mackerel; back then, he might get two pounds of filet from a single flounder. He regrets the building of the causeway that obstructs fish passage, and all of the other negative impacts humans have had on marine life.

Ed's historical research has shown that sea-run and landlocked salmon did coexist on the St. Croix from head of tide (just above Calais) all throughout the system, along with alewives and shad. He is documenting this learning in a book soon to be published.

Ed has focused much of his work toward shad and alewife restoration in the Skutik River. These are keystone species that keep the river healthy, adding incredible amounts of nutrients. When small-mouth bass fishing is prioritized, it hinders the success of restoration efforts, disrupting the local ecology. Ed explained that shad can get past Milltown but it's a struggle. (Shad and alewives are more durable because they can tolerate today's warmer water.) He noted, "Shad are lucky to make it to Woodland. They are getting past Milltown (it's a struggle though, many don't make it), but how much further they can get is not certain. One year only 55 shad were counted passing Milltown."

Alewives spawn in lakes, ponds and slow-moving stretches of streams. The Riverkeepers have observed that a few have made it up as far as Little Falls, but not as far as West Grand Lake. There is a wealth of information on the St. Croix River at:

including an enlightening 2003 Gulf of Maine Times article by Ethan Nedeau, "The Amazing Alewife" —

Alewives provide nutrients to freshwater ecosystems with their eggs and sperm, excreted materials, and decaying bodies. They may spawn 7-8 times in a lifetime. They feed zooplankton, clams and insect larvae; crayfish, turtles, eels, raccoons, and gulls. When bald eagles, ospreys, cormorants, and great blue herons are nesting and rearing chicks, they feed heavily on migrating alewives. (John Banks has explained how their numbers can offer protection for returning salmon in the Penobscot River.) Juveniles live in freshwater for 3-7 months, growing up to 5 inches before descending the watershed and going out to sea. Alewives also host freshwater mussels (being the sole host for these filter-feeders which contribute greatly to cleaner water).

"The productivity, diversity and health of coastal freshwater habitats depend in part on an unimpeded spring migration of alewives, just as the Gulf of Maine depends on an unimpeded summer and fall migration of alewives back to the ocean to fuel marine food webs. By blocking and degrading the conduits that connect headwaters to the sea, we have severed the two-way flow of energy between the ocean and its watershed....Restoration of alewives will involve removing dams or installing better-designed fishways that allow both upstream and downstream passage, dealing with pollution problems and maintaining adequate stream flow."